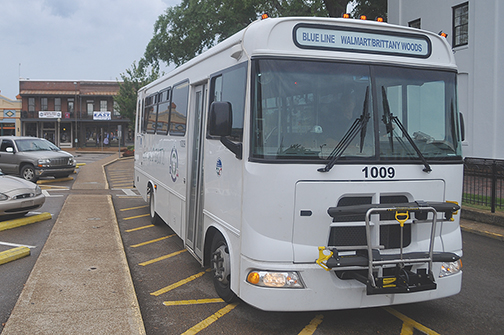 An Oxford University Transit bus picks up and drops off passengers on the Square. More than 70,000 people rode the bus in August, compared to 55,000 a year ago.

While university officials use student registration to see if enrollment has increased, one can simply hop on an Oxford-University Transit bus to know there are a whole lot more students at the University of Mississippi.

According to OUT Manager Ron Biggs, the bus system saw its highest ridership ever in one day on Sept. 3 — a nondescript Thursday when there were no special events going on. On that day, 10,947 people rode the bus.

On the first home game Saturday, 5,945 rode the free shuttle from the JAC into campus.

Last year, the system had record months in September and October when it broke 200,000 riders in a month and is on track to meet or exceed that this year.

After being on a decline, the fare box also saw an increase. The university pays for its students to ride the bus free of charge. In August, fare boxes and monthly passes sold totaled $2,333, up from August 2014 when $2,131 was collected.

During the OUT board meeting Wednesday, commissioners discussed a request from Mayor Pat Patterson, who was not at the meeting, to consider adding one bus to run from 9 p.m. to 1 a.m. Thursday through Saturday from the Square onto campus.

Board Member Mike Harris, parking and transportation director for Ole Miss, said there are a lot of things to consider besides the cost associated with another route, which could run about $80,000. He said there would have to be security on the bus and a very strict policy on how to handle situations like if someone is passed out on the bus. The bus also would have to be cleaned nightly.

“There’s always two sides of the coin with these types of routes,” said Harris, who worked at Mississippi State University with its transportation system before coming to Ole Miss. “You have folks who think it’s a good idea to give them a safe way back to campus when they may have had a bit too much to drink, and then you have those who think since you’re giving them a safe way back they don’t have to worry about how much they’re drinking. There’s no responsibility.”

Tim Akers of McDonald Transit, which manages the bus system, said since the budget for 2015-2016 is already approved, the city and university would have to pay for the bus without assistance from grant funds.

Commissioner Carol Hayney said she had some concerns about the bus and stepping on the toes of the private taxi and pedicab companies, but felt the idea was worth looking into for safety reasons.

The other commissioners agreed and instructed transit officials to come up with figures on how much the late-night bus would cost. They’ll bring those numbers to the October board meeting and invite Patterson to discuss the idea in more detail.