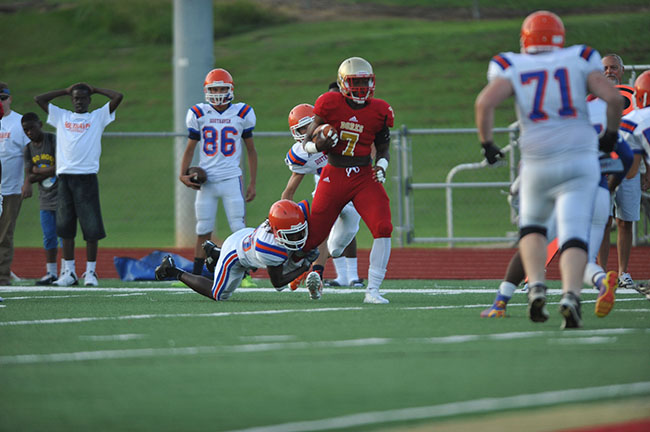 Lafayette High vs. Southaven in a preseason jamboree at William L. Buford Stadium in Oxford, Miss. on Friday, August 14, 2015.

By any measure, Lafayette’s senior class has been a success.

They’ve helped the Commodores win 31 games the last four years with eight games to go in their final regular season. They’ve won a region title and played for a state championship as sophomores in 2013.

But none of those wins have come against Oxford.

“I think about it pretty much every day,” said Lafayette senior linebacker Quin Jones, who’s been starting since that ‘13 season.

Lafayette’s 19 seniors are 0-3 against their crosstown rival, and the games haven’t been that close. The Chargers held Lafayette to less than 50 yards of offense in a 19-0 win in 2012 and shut the Commodores out again in 2013. By the time Oxford got done with another rout last year, the Chargers had outscored Lafayette 90-7 in the last three meetings.

It’s a trend Jones and the rest of his classmates will try to reverse in their last go-around with Oxford when the teams renew the annual Crosstown Classic tonight at Lafayette’s William L. Buford Stadium.

“That would kill me. I’d think about that through college and just life about how I went 0-3 against Oxford,” Jones said. “We were just talking about that earlier (Tuesday) that we can’t lose to Oxford. Not this year, our senior year. They done got us pretty much the last three years in a row, and it can’t go out like that this year.”

Lafayette (3-0) is the team with all the momentum heading into this year’s matchup with an unblemished record and wins over Horn Lake and Grenada, teams in higher classifications. Oxford has challenged itself, too, with all three of its games coming against Class 6A opponents, but back-to-back losses to Starkville and Madison Central have the Chargers (1-2) with more losses than wins through the first three games.

But coaches and players at Lafayette have taken notice of the Chargers’ quality of opponent and aren’t being fooled by Oxford’s record.

“We know we’re going against a very talented team with some really good players,” Lafayette coach Eric Robertson said. “They just put up 500 yards of passing offense against Madison Central. We know we’ve got a big challenge ahead of us, but it’s definitely a goal of our players and our coaches (to win).”

Oxford’s talent, led by Tulane commit Jack Abraham, Ole Miss commit D.K. Metcalf and defensive end Korbin Harmon, usually produces big plays, and Lafayette knows more are likely to come tonight. Jones said he thought the Commodores let the momentum swings of an emotional game overwhelm them in recent matchups, but he’s counting on the experience of himself and others to better handle it this time.

“With that talent on the side of their field, we know that they’re going to make big plays,” Jones said. “It’s just kind of bonding together and keeping that mindset to just knock that play out of our heads and just keep playing the next play.”

Oxford’s defense has also made Lafayette predictable. In last year’s 41-7 loss, the Commodores mustered just 200 yards of offense, none of them coming through the air. Running back Tyrell Price is coming off a 272-yard outing against Grenada, but Lafayette has featured more balance in the early part of the season with first-year quarterback Will Ard throwing for 354 yards and four touchdowns with no picks.

A starter since his freshman season, Johnson has felt the frustration all three times, but that offensive equilibrium is one of the reasons the Ole Miss commit said this year is “the first time in a while we feel really confident about how we match up” and could help he and the rest of the seniors fill in one of the few omissions on their high school resume.

At least that’s the plan.

CROSSTOWN SHOWDOWN: Oxford, Lafayette set to square off in…