Former UM student at center of noose incident to be sentenced 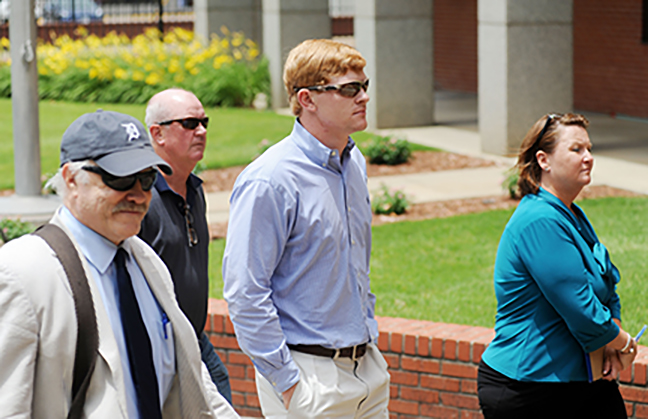 Former University of Mississippi student Graeme Phillip Harris, third from left, enters federal court, where he pleaded guilty to a charge of using a threat of force to intimidate African-American students and employees at the university, on Thursday, June 18, 2015. Harris, of Alpharetta, Ga., was charged in connection with a noose placed on a statue of integration pioneer James Meredith and will be sentenced on Thursday. EAGLE Photo/Bruce Newman

The former University of Mississippi student who pleaded guilty for his role in hanging a noose from the James Meredith statue on Ole Miss’s campus last year is set to be sentenced at 10 a.m. Thursday at the federal courthouse in Oxford.

Graeme Phillip Harris, who is white, pleaded guilty in June to a misdemeanor charge of threatening force to intimidate African-American students and employees at the university. Prosecutors agreed to drop a stiffer felony charge in exchange for the plea.

In the indictment, Harris conspired in February 2014 with others to use the cover of darkness to hang a rope and an outdated version of the Georgia state flag, which prominently depicts the Confederate battle flag, around the neck of the Meredith statue on the Ole Miss campus, with the intent to threaten and intimidate African-American students and employees at the university.

Meredith, the first black student at Ole Miss, integrated the school in 1962

U.S. District Judge Michael Mills will sentence Harris Thursday, who could face up to a year in jail and a fine up to $100,000.

Another possible defendant in the incident, Austin Reed Edenfield, is scheduled to waive indictment and enter a guilty plea to one criminal charge this week.

An attorney close to the case said the charge is likely going to be similar to what Harris pleaded guilty to in June. Prosecutors would not confirm if Edenfield was the second defendant in the noose-hanging incident, claiming they could not discuss the case until the Wednesday hearing.

Edenfield is set to go before Mills at 1:30 p.m. Wednesday in U.S. District Court.