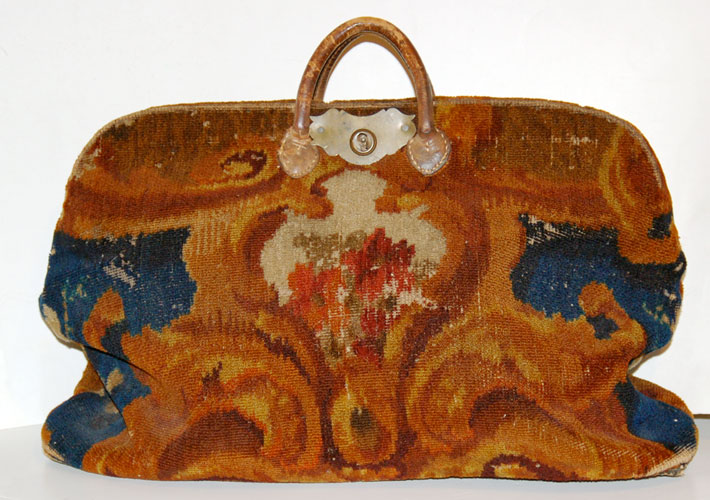 Southern Democrats used the term “carpet bagger” to suggest that Northerners who came to the south after the war were a pack of second-rate opportunists, with their belongings packed in a cheap bag made of carpet material.

After the end of the Civil War, Oxford and Lafayette county were invaded by two groups who made their way here solely for the opportunities that they saw in a defeated land.

These were the carpetbaggers from the North and scalawags who aligned themselves with the Republicans of Mississippi.

Southern Democrats used the term carpetbagger to suggest that Northerners who came to the South after the war were a pack of second-rate opportunists, with their belongings packed in a cheap bag made of carpet material. Most of the Northerners who came south were well-educated men and women from middle-class backgrounds. Some of the men had served in the Union army during the war, and they saw an economic opportunity in moving south.

The local Democrats reserved their greatest contempt for those they called scalawags. This slang word came to mean white Southerners who aligned themselves with the Republican party. These people were completely unscrupulous and worthless, according to some accounts.

The carpetbaggers, in some cases, were lawyers, businessmen or newspaper editors, who had left behind prominent roles in northern communities. As investors in agricultural land, teachers in the new schools or agents of the Freedmen’s Bureau, most of the northerners hoped to transform the South by creating new institutions based on northern models, especially free labor and free, public schools.

Scalawags were greater in numbers than the carpetbaggers. They included many southern Unionists, who had opposed secession in 1860-1861, and others who thought alliance with the Republicans of the North offered the best hope for economic recovery. Scalawags included small-town merchants, artisans, and professionals who favored a modernized South.

Despite differences, freedmen, carpetbaggers and scalawags used the Republican part to inject new ideas into the South. Throughout the South, Republican governments extended the role of state and local government and expanded public institutions, seeking to make southern states more like states in the North. They established or expanded schools, hospitals, orphanages and penitentiaries. Free education was perhaps the most permanent legacy of Reconstruction.

The first general election after the war came in November 1867. After a voter registration drive across Lafayette County, which had begun in July of 1866, the final tally of registered voters showed that our county was split between old-line Democrats and the new Republicans.

The problem was that, wherever they came from, Conservative whites saw these Republicans as outlanders stirring up trouble between the races. Later, when Congressional Reconstruction became the law in the South in the late 1860s, this would all change and the Republicans would take charge of the state and local governments. This would not change until the elections of 1875 when the Democrats regained control of state and local governments.

They were written at the beginning of the last century and several local political leaders from that period were still alive and were interviewed by the two students.

Adelbert Ames, the carpetbag Republican governor from Massachusetts, appointed some carpetbaggers and scalawags to political office here in our county and town. Most of these men were white and to name a few were: DeWitt Stearns of Pennsylvania as wprobate judge; A. Worley Patterson as a U.S. marshal and Robert A. Hill as a federal district judge. Some Freedmen such as Alexander Phillips, Tobe Humphries, Bob Stockard, and Mack Avent, all former slaves of Lafayette County, became Republican leaders and office holders.

In 1871, there was an incident in the Federal Courtroom of Judge Robert A. Hill, which also involved U.S. Marshal James H. Pierce and local attorney L.Q.C. Lamar. The incident, which I will write about later, almost caused Lamar to lose his liberty and his license to practice law. Marshal Pierce would sustain a dislocated jaw by a blow from Lamar.

Another incident, which involved Marshal Pierce, occurred on the streets of Oxford during the elections of 1872. Pierce led a group of some 400 black voters, four abreast, down North Street about noon going toward the courthouse polls. On the Square they were met by a groups of Democrats bent of keeping the Freedmen from the polls.

The Democrats lined up a cannon, which had been on the grounds of the Lafayette County Courthouse since the end of the war, facing the crowd of Freedmen voters. They pretended to load the cannon with cut-up chain, and fired into the crowd of Republicans. It was actually a blank charge, but it did have the desired effect of frightening the Freedmen into a hasty retreat.