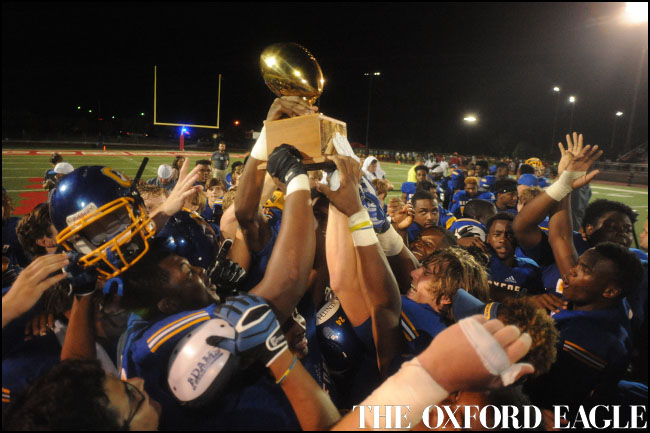 Johnny Hill felt some pressure last week. Most of it came from himself.

For all the victories Oxford’s coach has accumulated against Lafayette, it was Friday’s result that was either going to be a sweet sendoff to his time in the crosstown rivalry or leave a bitter taste in his mouth.

Oxford sent Hill out a winner in the annual Crosstown Classic with a 31-21 win over the Commodores at Lafayette High’s William L. Buford Stadium. It was also a signature moment for Oxford’s seniors, who went 4-0 against the Commodores.

“It’s unbelievable,” Oxford senior quarterback Jack Abraham said. “We wanted to send coach Hill out of this rivalry with Lafayette with a win, and four straight, it’s never felt so good.”

But Hill took a moment to enjoy his last rivalry win for himself.

“It’s real sweet,” said Hill, who’s set to retire at the end of the season. “This is probably the most pressured Lafayette game I’ve ever been in because there’s not no next year for me even though we might’ve won more than lost. But you want to win that last one.

Abraham threw for three touchdowns while running back Drew Bianco ripped off a late 20-yard touchdown run. But unlike recent years, Lafayette punched back.

The Chargers (2-2) outscored Lafayette 90-7 in the previous three meetings, but the Commodores stayed close throughout with a wave of punishing runs from tailback Tyrell Price, who racked up 245 yards and two touchdowns on 34 carries.

But miscues caught up to the Commodores (3-1) late.

Price fumbled on the tail end of a long gainer on Lafayette’s second possession of the second half, and Oxford converted the turnover into points when Abraham connected with Jimmy Greaser for a 13-yard touchdown pass six plays later to give Oxford a 24-14 lead with 4:30 left in the third quarter. The Commodores’ next two possessions ended with quarterback Will Ard being picked off by C.J. Terrell.

“A lot of things were mistakes that we made and missed opportunities that we had, and I’m sure they had some as well,” Lafayette coach Eric Robertson said. “I thought we had some great chances to win the football game, and we just didn’t come away with points on the board.”

Ard atoned for the mistakes with a 20-yard touchdown run with 6:30 remaining in the game to get Lafayette back within three, but Oxford milked the next four minutes and change on an eight-play drive capped by Bianco’s scamper to push the lead back to double digits with 2:09 left.

Lafayette also missed a pair of field goals in the red zone and had another one blocked, which was returned for a touchdown to end the first half only to be negated by a personal foul to keep the score 17-14 in favor of the Chargers. Abraham’s two first-half touchdown tosses went to Ken Presley while Greaser finished with eight catches for 91 yards.

“We shot ourselves in the foot,” Ard said. “We got inside the 15 three times and just didn’t get it in. You can’t beat a team like that if you can’t get it in the end zone.”