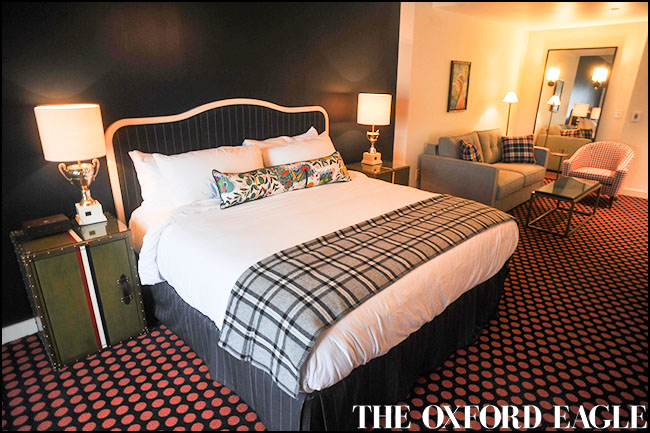 Whether you’re walking into the Graduate Oxford hotel from the grand entrance off North Lamar Boulevard, or pulling into the parking lot to check in for a few days, once entering the hotel you will be served — with either a room key or a cocktail.

The front desk is centered in the large lobby. One side is where people go to check in and the other side is a bar where guests or people walking in off the street can stop in for a drink and mingle in the 3,000-square foot lobby.

The hotel is a collaboration of the Chamblee Hospitality Group and A.J. Capitol Partners and is located where the old Downtown Inn stood for many years until it was demolished two years ago.

Luke Chamblee, president of the Chamblee Hospitality Group, was the owner of Downtown Inn before partnering with Ben Weprin and A.J. Capital Partners. Designs for the hotel were hashed out for over a year with the Oxford Courthouse Square Historic Preservation Commission that worked on making sure the hotel remained in sync with the feel of the Square without overpowering the nearby residential neighborhoods.

“They are all in place for a good reason and their goal is to protect the integrity of the city and they were great to work with,” Weprin said.

Chamblee believes the hotel is something Oxonians will be proud to have in their community for generations to come.

“We didn’t want it to look like new construction so we tried to make it appear like it was built in the 1900s,” Chamblee said. “Oxford was needing a unique hospitality partnership that represented the uniqueness, creative and exciting side of why so many people love the town. Oxford isn’t a cookie-cutter town and we wanted this hotel to be a destination for those who want the ‘Oxford experience.’”

The hospitalists worked with local families, including the Manning family, and local artists to make each piece of art unique that comes with its own story.

Chief Creative Designer Andrew Alford with AJ Capital said a construction worker recently asked him why there was a painting of a Native American princess in the room.

“It’s Princess Hoka, who sold the land Oxford sits on to the founders,” Alford said.

“The artists we worked with had a lot of their own stories to tell and we made friendships and created bonds which helped us to find more of Oxford’s stories. We’ve been welcomed so strongly, Oxford feels like a second home.”

There are 135 rooms in the hotel which includes four suites named after local celebrities including author Willie Morris and former Ole Miss Rebel Charlie Conerly Jr. There’s a large ball room for weddings and other events and a board room for business meetings, and of course, free Wi-Fi.

All of the catering for events held at the hotel will be catered by well known, Oxford chef John Currence.

Walking into the hotel, guests walk on tile that first appears to be in a typical geometrical shape, but on closer look, the tiles are all H’s and T’s, for the Ole Miss chant, “Hotty Toddy.”

Local artist Charlie Buckley created a 3-D image of the Grove and even reached out to regular tailgaters to find out where they put their tents. On the large artwork hanging in the lobby, the names of those families are written on the tents.

The pink, wire-brushed wooden floor of the lobby turns into a deep, mahogany-stained floor that leads into Cabin 28 coffee shop and café. Modeled to pay homage to the Neshoba County Fair, the ceiling lights are designed to look like parts of a carnival ride. Visitors can enjoy their coffee on patch-quilt benches. The front of the service counter is covered with old fair tickets in an intricate design.

On the fourth-floor is The Coop, a chic but sassy terrace and lounge where pictures of chickens mix with crystal chandeliers and farmhouse fixtures. From the patio, one can just about look down over the entire Square.

“People travel a long way to be on the Square and see the view,” Chamblee said. “And we’re lucky we were able to capture that view.”

The owners plan on having the hotel open for guests this week, pending approval by city building inspectors. The Coop and Cabin 82 are expected to be open within the next two weeks.

Other amenities include a laundry facility and a 24-hour fitness center. The hotel is pet friendly. Room rates range from $144 on a weeknight up to about $400 for a home football game weekend.

To learn more about The Graduate, book a room or review pricing packages, visit http://graduateoxford.com.