LIGHTING IT UP: Rebels’ production on offense one for the record books 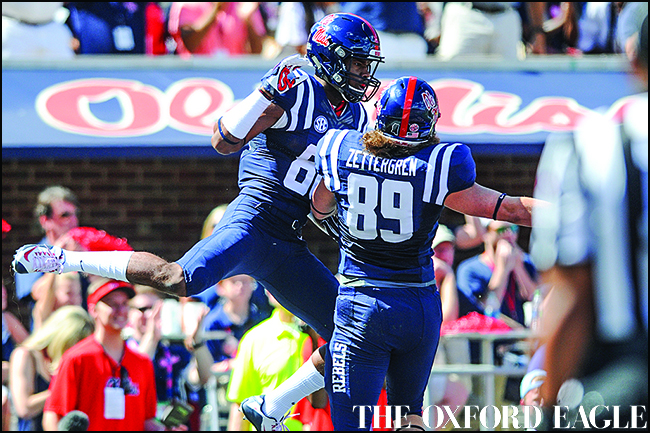 The Ole Miss offense has put up 149 points and 1,271 yards in its first two games of the season. A lot of that has come off explosive plays of more than 25 yards.

Quarterback Chad Kelly has been the main reason for the surge in offensive production in just eight quarters of play this season.

Kelly has thrown for six touchdowns and 557 yards. Three of those touchdowns are for more than 50 yards. The shortest touchdown pass from Kelly is 14 yards, which happened in Saturday’s 73-21 win against Fresno State.

The offense put up more than 600 total yards of offense in back-to-back games for the first time in program history.

“We said that what we want to do is be aggressive and go after it,” Ole Miss offensive coordinator Dan Werner said after Saturday’s game. “We’ve got quarterbacks who can throw down the field, so we feel good about it. We’ve got some big runs, too.”

In the season opener against UT-Martin, senior running back Jaylen Walton rattled off a 60-yard touchdown run on his first carry of the game. In that same game, Eugene Brazely had a run of 70 yards and former Lafayette standout D.K. Buford had a touchdown run for 38 yards.

In the passing game against Fresno State Kelly found a favorite target in Quincy Adeboyejo. The junior wideout caught five balls for 120 yards and three touchdowns.

“That was one of the first guys I talked to before even getting to campus,” Kelly said of Adeboyejo. “He’s been nothing but a great teammate, a great worker. I can’t say enough about Quincy, and it’s starting to pay off. He’s one of the guys who pays attention to every little detail.”

Kelly has spread the wealth as he also enjoyed throwing to Cody Core in the early part of Saturday’s game. Core led the team with six receptions for 96 yards and one touchdown. Nine receivers caught passes on Saturday, and 11 were targeted by Ole Miss quarterbacks in last week’s game.

“We go out there, and if there is a deep play called, we know we can run as fast as we can and Chad is going to hit us,” Adeboyejo said. “Whether it’s a 50-yard, 60-yard (play) down the field, you just hope he can get the ball to you. He’s shown that he can do that.”

With video-game like numbers coming against the likes of UT-Martin and Fresno State, it is hard to analyze the numbers too closely to determine if the offense is an elite unit or not. The real testcomes this coming Saturday in Tuscaloosa, Alabama, against the No. 2-ranked team in the country, Alabama.

“Nothing against the last two teams, but obviously we’re getting real here in the next week,” Werner said. “We’ll see how we do there.”

Offense fizzles out as Blue Devils fall to Pontotoc