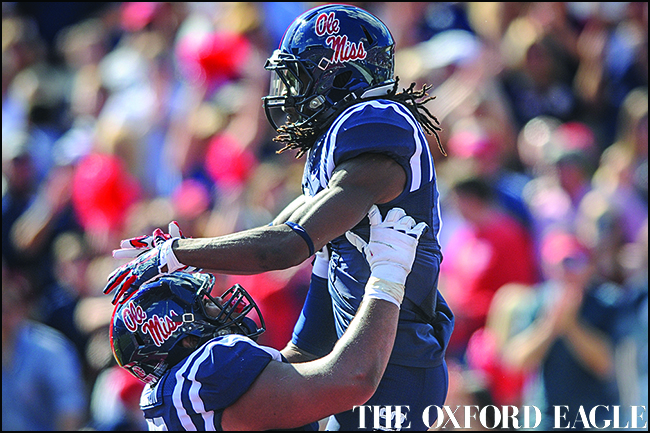 Ole Miss won’t get a true gauge of exactly where it is as a team until it’s done playing Alabama next weekend, but the Rebels have done just about all they can do to get ready.

At least they know who their quarterback is.

Ole Miss faced its first Football Bowl Subdivision opponent Saturday, but the 17th-ranked Rebels treated Fresno State much like they did Tennessee-Martin the previous week. Ole Miss scored early and often, cruising to a 73-21 win in front of 60,302 at Vaught-Hemingway Stadium.

The Rebels (2-0) used 607 yards of offense to roll up more than 49 points in back-to-back games for the first time in program history. Robert Nkemdiche scored his second touchdown in as many weeks, Akeem Judd scored his first career touchdown and Eugene Brazley had a touchdown run, but the day belonged to Chad Kelly.

Kelly got the start at quarterback for the second straight game and led the offense on four straight scoring drives. Kelly threw three of his four touchdown passes on those drives, added a 4-yard scoring run on the Rebels’ second series and finished 20 of 25 for 346 yards, cementing his status as the Rebels’ guy behind center.

“It is his (job) to lose, and he certainly has done nothing to put himself out of it,” Ole Miss coach Hugh Freeze said. “So he’s the starter, and I expect that to continue.”

Ole Miss again got snaps for Ryan Buchanan and DeVante Kincade, but the rotation wasn’t nearly as frequent. Kincade’s first series early in the second quarter resulted in the Rebels’ only punt while Fresno State’s Shannon Edwards cut in front of Buchanan’s fifth pass of the day and returned it 56 yards to get the Bulldogs on the board with 6:43 left in the second quarter.

Kelly went back in the game the following series and got the Rebels back in the end zone on a 44-yard touchdown pass to Quincy Adeboyejo, who had five catches for a career-high 120 yards and three touchdowns. Kincade attempted just six passes, completing two of them for eight yards, and added 48 yards on the ground while Buchanan went 4-for-6 for 38 yards.

“I’ve always approached it every day as if I was the guy,” Kelly said. “Every day, you just have to come to work. Just got to keep working every single day on the field and off the field and just understand that, hey, you’ve got to perform.”

Said Adeboyejo, “(Kelly’s) deep balls are one of the better balls I’ve ever encountered from high school and since I’ve been here. He just has really good touch on his deep balls.”

Fresno State quarterback Chason Virgil connected with Josiah Blandin for a 9-yard touchdown on the final play of the first half, but he was also picked off by C.J. Johnson and Trae Elston, who returned his 38 yards for a score to push Ole Miss’ lead to 49-14 with 9:39 left in the third quarter. Chief Brown added a pick-six in the fourth.

Most of Fresno State’s offensive success came on the ground as the Bulldogs (1-1) ran for 163 of their 316 yards. Marteze Waller, who also had a 7-yard touchdown reception, led Fresno State with 91 yards on 11 carries.

“It seems to me that we’re missing a little physical edge at the point of attack at times,” Freeze said. “They move a tight end or they go unbalanced, and we’re just not lined up correctly. I still think we have a chance to be a really good defense, but you’ve got to get those things fixed and corrected for sure.”