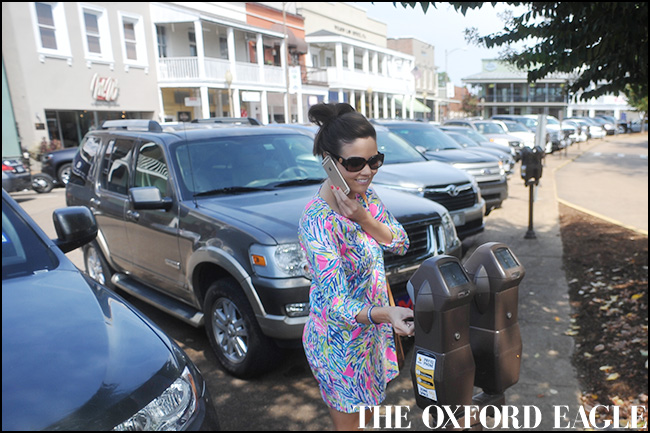 Natalie Brown puts change into a parking meter on the Square on Friday.

Paid parking has met and exceeded the expectations of city officials, not only in the amount of revenue being brought into the city, but by managing the parking in the premium parking spots around the Square.

And of course, the money is always a plus.

While no one is jumping for joy over having to drop quarters or swipe a debit card to park on the Square, the system seems to be better received by the general public than how it was managed before the meters were put in.

“When we installed the meters, I was not sure what to expect, but the feedback has been overwhelmingly positive from shoppers and businesses,” said Mayor Pat Patterson. “We have finally been able to move people off the Square who parked there all day long, every day. I wish we had put them in place five years ago.”

The ideas to implement parking meters was brought up four years ago by the Oxford Downtown Parking Advisory Commission but lacked support at the time from the Oxford Board of Aldermen and it never came to a vote. Instead, the city contracted with Standard Parking to help manage downtown parking. A three-hour parking maximum was implemented and, while the program was successful in creating more turnovers for parking in the premium parking spaces around the Square, it was costing the city more than $250,000 a year. The aldermen voted in May 2014 to release Standard Parking from the contract and took back control of parking. Within two months, a new paid-parking system was voted on and approved by the commission and the aldermen.

“We felt like we needed a more efficient way to enforce our parking regulations,” Parking Director Matt Davis said. “We felt the meters would be more efficient and user-friendly. It seems from the feedback that we have received, that is the case.”

Davis said he and his department, along with other city officials, predicted that the meters would earn about $567,000 before expenses.

“Our actual earnings before expenses for all of the past year was $624,053,” he said Thursday.

On average, the meters earned about $52,000 a month during the last 12 months with the highest revenues coming in August of this year when $60,047 was collected for the month.

There are 286 parking meters in the premium parking spaces around the Square.

Overtime ticket collections have brought in an additional $75,856 into the city. Fines for not feeding the meter are $10 for the first two tickets, $25 for the third and $50 for each additional ticket in a year’s time. After five or more, the city can place a boot on the vehicle, preventing them from driving away until all the fines are paid plus a $75 boot fee. A boot can also be placed on a car if a ticket is more than 120 days past due. There is a total of $50,375 in outstanding tickets.

A handful of spots around the Lafayette County Courthouse remain meter free as city and county officials discuss the city gaining a lease to put the meters on county property. The city owns the parking spaces, but the county owns the sidewalk where the meters would have to be located.

Patterson recently asked the commission to consider changing it to three or more tickets to be booted.

“That’s the surest way to collect on these tickets,” he said.

The funds from the parking meters and tickets are put into the city’s general fund as a line item for parking and Square improvements that could go toward the construction of a parking garage. Several areas have been considered for the garage; however the parking commission and aldermen have favored the parking lot behind city hall.

Spots can be reserved by contractors or for special events for $10 a day.

“We allow contractors to rent the space for up to five consecutive days,” Davis said. “In certain situations, we will reserve a space for a special event, or person, such as when Governor (William) Winter came to speak and we did not feel he could walk very far.”

The Parking Division has one full-time officer, Michael Temple, who works during the weekdays. In the evenings and on weekend, Oxford Police Department reserve officers work in part-time shifts to enforce the meters.

In August, the city and the University of Mississippi announced they would both be contracting with Passport, a parking application where people can add money to the meters using their phones, tablets or by calling. The app notifies you when the time is about to run out on the meter.

“The use of the app is mixed in regards to people extending their parking and also to remotely pay for the meter if the weather is bad,” Davis said. “The application is doing very well.”

Looking down the road, Davis said he doesn’t foresee additional meters being added to the Square.

“There could be more (free) parking spaces put in or even a parking structure,” he said. “As for more meters, we currently are fine with the amount that we have at the moment.”