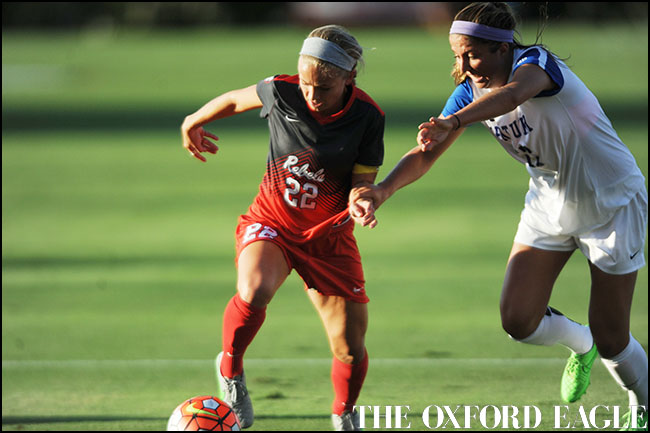 The Ole Miss soccer team dropped the first contest of the season in a gritty conference matchup against Kentucky on Friday night at the Ole Miss Soccer Stadium. The No. 18 ranked Wildcats (6-1-0) defeated the Rebels (4-1-2) by a final score of 4-2.

Ole Miss stepped onto the pitch for the first conference match of the season and tallied 11 shots on the attack, while goalkeeper Marnie Merritt made two great saves. Two different Rebels marked goals on the night, as Addie Forbus tallied her fourth goal on the season and Gretchen Harknett notched her second.

Four different Wildcats scored for Kentucky, and the visiting team outshot the Rebels 19-11. Each team recorded seven corner kicks throughout the night.

Ole Miss made the first jump early in the night as Harknett sent the ball into the upper-left 90 of the net. Getting the ball on the right side of the 18-yard box on an assist by Jessica Hiskey, the junior found the back of the net in just the seventh minute of the game. Both teams continued to battle throughout the night, taking turns defending their respective goals.

Kentucky answered the Rebel goal in the 37th minute after an Ole Miss foul in the box. Kaitlin Miller scored her first goal of the season on the penalty kick and tied the score at 1-1. Ole Miss went back to attacking the Wildcats’ goal.

With two minutes remaining in the first half, Forbus’ shot on goal hit the crossbar and barely missed the mark as the score remained tied going into the locker room.

“I thought we came out in the first half, played well and set some rhythm. We got a good early goal,” noted head coach Matthew Mott. “In the second half it was all Kentucky. They really came out with a lot of energy. You have to give them credit.”