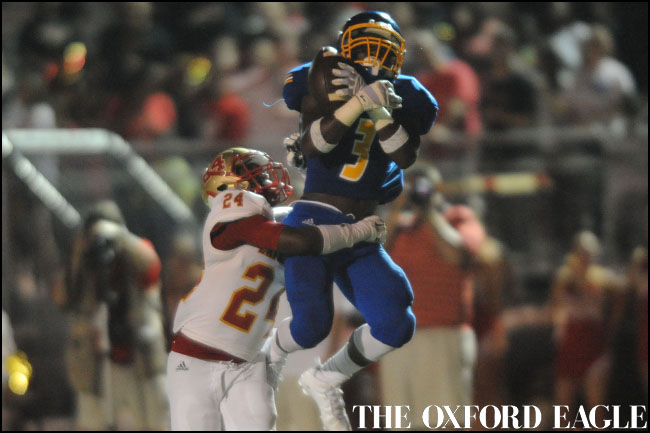 The 44th annual Crosstown Classic had its fair share of storylines heading in, but there was only one major storyline during the game.

Whenever Lafayette found some momentum, there was Oxford — or more specifically, C.J. Terrell — to stop the Commodores dead in their tracks. The sophomore defensive back had one of his best games of his young career as a Charger, making key plays when Oxford needed them.

Terrell accounted for two interceptions and caused Lafayette’s Tyrell Price to fumble midway through the third quarter, halting what was a promising Commodore drive near the Chargers’ 30-yard line.

One of his interceptions came on a third-and 11 when Terrell snagged a pass from Commodore quarterback Will Ard near the visitor’s sideline. His other pick came when Ard attempted a pass into the end zone, but Terrell got a jump on it and hauled it in at the goal line.

“The one on third-and-long, I just played the ball. It was just a special moment,” Terrell said. “I had a better jump (on the interception at the goal line) and I tried to return it, but I got tackled. Me being a sophomore and starting on a big stage like this, it was really special.”

During what appeared to be a pivotal moment in the game, Terrell ran down Price, who had broken into the Chargers’ defensive backfield, and caused the senior running back to fumble. It was a drive where Lafayette was looking to cut into Oxford’s 24-14 lead late in the third quarter.

“At halftime, (the coaches) got on to us bad, but we came out and stepped up big-time,” Terrell said. “(Price) got past our linebackers, and then I broke down and made him fumble. I heard the fans scream, and it just shocked me to know I made one of the best running backs in Mississippi fumble in a big-time game.”

Terrell was not the alone in causing havoc for Lafayette. The Chargers blocked a field goal attempt in the final seconds of the first half and returned it for a touchdown, but it was called back due to a personal foul penalty.

The special teams became a self-inflicting wound for the Commodores all night. On top of having one field goal blocked, kicker Bryce Hertl missed two field goals inside the 15-yard line.

“That’s unfortunate. Bryce is a good kicker,” Lafayette coach Eric Robertson said. “I have a lot of confidence in Bryce, and he’s going to be fine. That’s just the way it goes sometimes. No kicker is going to be 100 percent.”

Mistakes were made by both teams, and it came down to which one could clean it up toward the end.

“Our mistakes were penalties,” Oxford coach Johnny Hill said. “We didn’t put the ball on the ground and that kind of stuff. We just hurt ourselves with some penalties and dumb penalties. We’ll learn from it and get better and move on.”