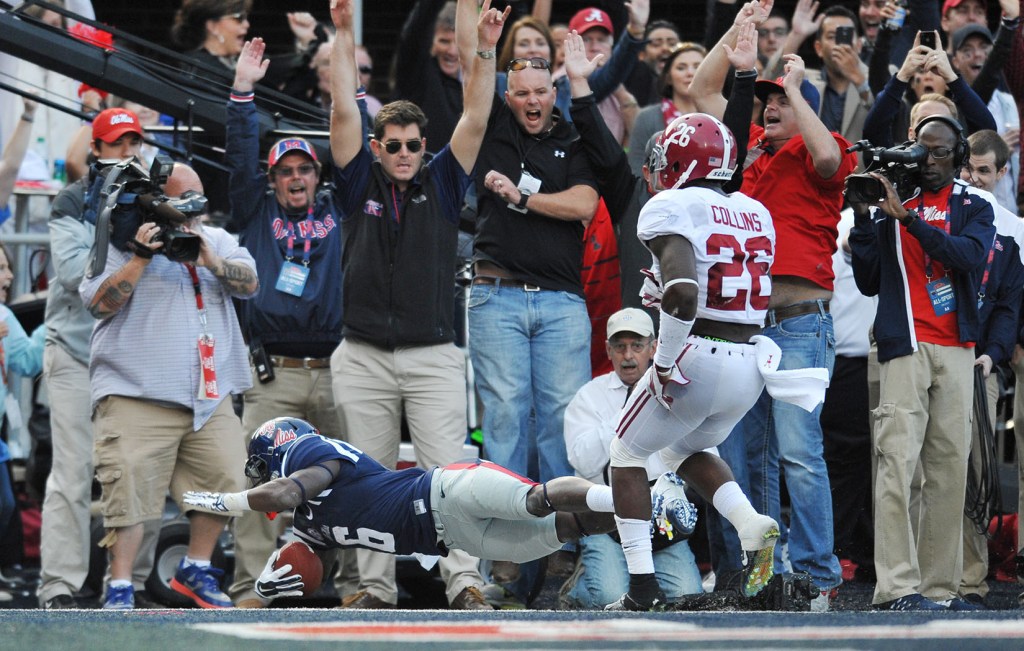 Ole Miss has made it look easy.

The Rebels have set multiple offensive records the first two weeks of the season against UT-Martin and Fresno State, a pair of overmatched teams that didn’t offer much resistance. Neither offense had a chance against Ole Miss’ defense, which has forced five turnovers and scored 18 points of its own as the Rebels have won their first two games by a combined score of 149-24.

But the schedule is about to beef up considerably with a trip to No. 2 Alabama looming, and the 15th-ranked Rebels will soon find out just how much progress they’ve actually made.

All the offensive fireworks have Ole Miss (2-0) leading the Southeastern Conference in scoring offense (74.5 points per game) and total offense (635 yards per game). Part of that is a running game that’s also the best in the league after two games, churning out 277 yards a game on the ground.

Alabama coach Nick Saban’s defense is annually one of the toughest defenses to crack for rushing yards, and the Crimson Tide enter this week’s matchup ranked 12th nationally against the run, surrendering just 63 yards a game to Middle Tennessee State and Wisconsin, a team that makes its living running the ball.

Running backs Jaylen Walton, Jordan Wilkins and Akeem Judd aren’t likely to go crazy against the Crimson Tide, but the ground performances are a start for an Ole Miss offense that finished 10th in the league in rushing offense a season ago.

“The way we’ve run it the last two games, that’s all we can go by,” Ole Miss offensive coordinator Dan Werner said. “So we’re real excited about it. Now if we can run the football against the guys we’re getting ready to play in the next few weeks, then obviously we’ve got a shot to be really good.”

Only 17 of those points scored by UT-Martin and Fresno State came against the Rebels’ defense — Fresno State returned a Ryan Buchanan interception for a touchdown Saturday — but Ole Miss hasn’t been as sharp as players and coaches would like, specifically at the spots deeper down the depth chart.

With starters sitting most of the second half in the blowout victories, UT-Martin and Fresno State found some space to operate late against the Rebels’ defense. Fresno State ran for 163 of its 316 yards Saturday while UT-Martin averaged 10.9 yards on its 16 completions.

Ole Miss defensive coordinator Dave Wommack said he likes where his first-team unit is heading into the week and “about two-thirds of our twos, but there’s some areas we’ve got to get better in.”

“There needs to be a tremendous focus,” Wommack added, “and that’s our job as coaches to get them ready for this game. I’m sure everybody is looking forward to it.”

But the Rebels aren’t likely to go past their two-deep on Saturday as Ole Miss looks for its second straight win over the Crimson Tide.

“We’re ready. We’re going to be ready,” senior linebacker C.J. Johnson said. “Starting (Sunday) is when we start prepping for them. It’s going to be a knockdown in T-town, and we can’t wait.”