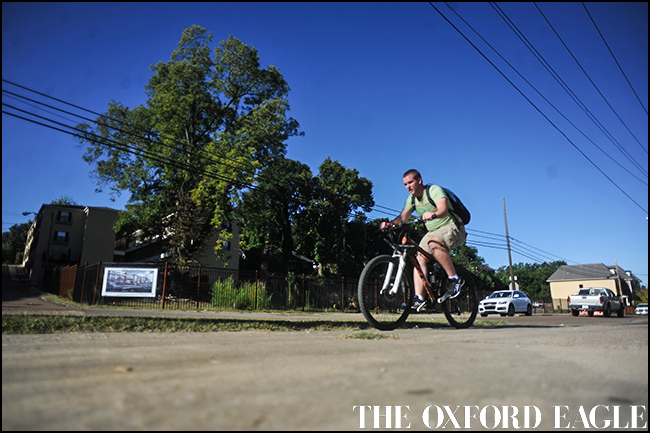 Traffic goes past Jackson Row, in Oxford, Miss. on Monday, September 14, 2015, is located on Jackson Avenue. The city has waited for Jackson Row to start construction for about two years after the site was cleared originally. Now in a bit of an ironic twist, a moratorium passed by the Oxford Board of Aldermen may prevent the builder from starting construction.

Jackson Row has sat, a big muddy hole, for about two years with city leaders eagerly awaiting the start of construction.

But now, a moratorium passed by the Oxford Board of Aldermen may prevent the builder from starting construction.

In July, the Oxford Board of Aldermen passed a moratorium for rezoning any current zone to multi-family and for special exceptions for residential in commercial zones until the Vision 2037 Comprehensive Plan is adopted, which is expected to happen later this fall.

When Jackson Row developers first presented the site plan more than two years ago, leaders gave them a special exception, which allowed residential condominiums on top of commercial space. The original developers then sold the property to CA Ventures of Chicago, which appeared before the Oxford Planning Commission earlier this year to get an extension of the special exception since the original had expired. It was granted, but with some required milestones. One was to begin construction in June.

“We got it all worked out, but they were past the June 1 deadline by the time we did,” Robinson said Friday.

Since the deadline was missed, the special exception is now invalid, and since there is a moratorium now, it could prevent the development from moving forward.

The Oxford Board of Aldermen is set to hear the case during its regular meeting at 5 p.m. Tuesday at City Hall to vote on whether to continue the special exception despite the moratorium. It’s an ongoing project and a vote for continuing the project would make it “grandfathered-in.”

The development is projected to have 11 buildings with varying heights and different facades. The total building area equals about 75,650 square feet with a retail/commercial/restaurant space at about 10,665 square feet with the remaining being residential space with about 66 units, or 225 beds and an underground parking lot for residents.