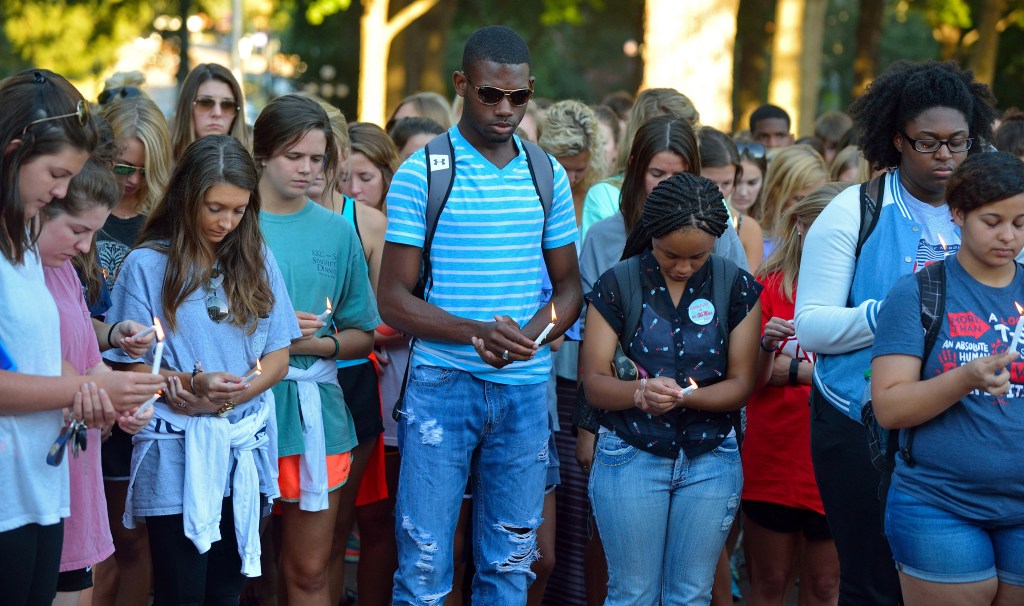 Ole Miss students gather for a candlelight vigil in response to a shooting at Delta State University. Photo by Thomas Graning/Ole Miss Communications

Shooting at Delta State University started flooding all forms of media Monday, some students at the University of Mississippi were reminded that Mississippi universities are not immune from violence.

“It’s terrifying to realize these things can happen anywhere,” said Ole Miss student Kendall White, 20, while on campus Monday. “Every time I see someone walk past the door outside my classroom, I wonder if they’re up to something and how I could escape the room. It shouldn’t be like that.”

At 10:45 a.m., Delta State was put on lockdown after an active shooter was reported. Later, he would be identified as Shannon Lamb, a professor at Delta State who taught geography and education classes.

Investigators said Lamb, 45, also was a suspect in the slaying of 41-year-old Amy Prentiss, who was found dead Monday in the home she shared with Lamb in Gautier.

A manhunt began for Lamb shortly after the shooting at Delta State.

Cleveland police Chief Charles “Buster” Bingham said Lamb was returning from Arkansas when a license plate reader picked up his plate as he crossed a bridge over the Mississippi River late Monday.

Police on the other side in Greenville followed Lamb but did not try to catch him, Bingham said. Lamb then pulled over and ran away. Bingham said police were waiting for backup when they heard a gunshot. When backup arrived, they searched and found Lamb with a gunshot wound to the head.

Delta State University President William LaForge said late Monday that the lockdown had been lifted. He said there would be no classes Tuesday but students, faculty and staff were invited to campus to attend a vigil in the evening.

Officers in the two cities said they had not uncovered a motive for either slaying. Bingham said it was still early in the investigation. LaForge said Lamb had earlier asked for a medical leave of absence, saying he had a health issue of some sort. But LaForge gave no information about the issue.

In the news conference, another officer who was not identified said anyone coming into contact with Lamb should use extreme caution: “His statement was that he was not going to jail.”

Wilson said Lamb made the statement to law enforcement but would not say when or how police spoke to Lamb.

Lamb received a doctorate in education from Delta State University in spring 2015, according to his resume posted on the university’s website. He started working there in 2009 and taught geography and education classes, and he volunteered with Habitat for Humanity.

The 3,500-student university in Cleveland is in Mississippi’s flat, agricultural region near the Arkansas state line.

Charlie King was in a history class down the hall from where the shooting occurred.

“A few minutes into the class, we heard these popping noises, and we all went completely silent,” he said.

Some people thought that it might be a desk or door closing or firecrackers, but King said he thought it sounded like gunshots. A few minutes later a police officer — gun drawn — burst into the windowless room and ordered everyone to get against the wall away from the door. Some people hid in a storage closet, King said.

The professor gave the students chairs to throw if the shooter came in, said King’s friend, Christopher Walker Todd.

“We’re relieved that this tragedy is over,” University President William LaForge told AP.

Ole Miss did not release a statement regarding the Delta State shooting. However, the University Police Department has created a video that gives instructions to students as to what they should do if they receive the notice that an active shooter is on campus. UPD’s main objection is to stop the threat.

“Injured people will be bypassed until the threat is contained,” states UPD Officer Jason Brown on the video.

Students should be prepared by becoming familiar with people and buildings they see every day.

If a student is in the area of shooter, the video instructs them to attempt to avoid the shooter by locking themselves in a room if possible and put signs on windows to alert people of anyone injured or trapped.

The video tells students to use anything they can as a weapon of defense should they come in contact with the shooter, including computers, desks, chairs and even writing utensils.

“University of Mississippi officials are constantly reviewing their emergency response plans to ensure they are prepared for any event — whether it’s a natural disaster or something like the tragic event that took place Monday at Delta State,” said Jonathan Scott, project manager with UM. “The health and safety of the students, as well as the faculty, staff and administrators and visitors to campus is priority number one for our public safety officials.”

“I don’t feel safe,” she said. “It’s happened there (DSU) and at Mississippi State in the past month or two and I just feel like it could possibly happen here.”

Last month, Mississippi State University went on lock down after an active shooter was reported. However, it turned out to be a false alarm. One student was taken into custody and later released after discovering he had no weapon and was not a threat.

—The Associated Press contributed to this report.