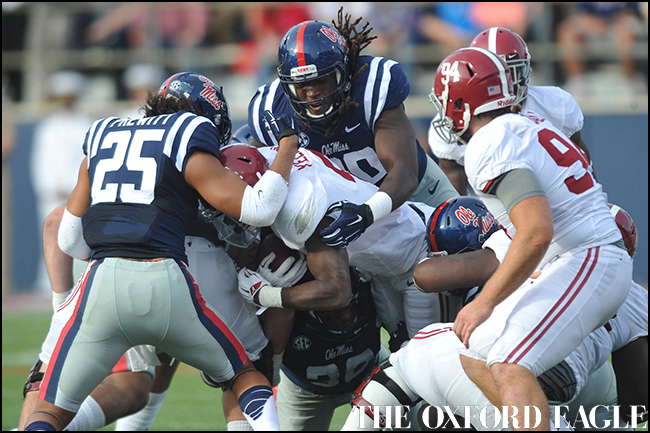 An early Southeastern Conference showdown is enough motivation for teams that have league championship aspirations, but Ole Miss’ players know this isn’t just any week for Alabama.

Not after what happened a year ago.

The Rebels notched arguably the biggest win in school history with last season’s come-from-behind victory over then-No. 1 Alabama at Vaught-Hemingway Stadium, snapping a 10-game losing streak to the Crimson Tide and handing them just their third SEC loss in their last 23 league games.

No. 15 Ole Miss (2-0) will try to make it two in a row against the second-ranked Tide (2-0) this year, but if the Rebels are going to do it, they’ll have to get it done in a venue that’s haunted them. Ole Miss will make the return trip to Bryant-Denny Stadium in Tuscaloosa on Saturday (8:15 p.m., ESPN), where the Rebels have lost 12 straight dating back to 1992.

And they expect to run into an angry Alabama team when they get there.

“Oh, they’re coming for us,” senior safety Chief Brown said. “They’re going to come out to make a statement, especially playing at home. They’re looking for us. We’re the one team that beat them in the SEC last year, and they’re looking to get back (with a) vengeance.”

It’s a significant step up in competition for the Rebels, who breezed past Tennessee-Martin and Fresno State the first two weeks by a combined score of 149-24. The Rebels’ offense, behind first-year quarterback Chad Kelly and a rejuvenated running game, has rolled up more than 600 yards in each game while the defense has looked just as opportunistic as it did a season ago with five forced turnovers, including a trio of interceptions returned for touchdowns.

At least head coach Hugh Freeze hopes Kelly is the real deal and that a running game that’s tops in the SEC after two weeks really has made strides. A pair of blowouts against inferior competition is making it hard to tell until the Rebels face someone their own size.

“Are we really ready? I don’t know,” Freeze said. “But I know that we can go and compete and our kids are confident right now.”

It will also be the conference opener for Alabama, which has disposed of Wisconsin and Middle Tennessee State in back-to-back weeks. The Crimson Tide have won seven straight league games since that loss to Ole Miss last year in Oxford and have lost to the same league opponent in back-to-back years just once since Nick Saban took over as the head coach in 2007.

“It’s not on our mind, but it’s in the back of our head and we want a chance to get back at these guys,” Alabama defensive back Cyrus Jones said, according to AL.com. “They’re coming in our house, and we’re just trying to get back at them like they did us.”

The Rebels are ready to give it their best shot.

“They know we’re not the same Ole Miss,” fellow safety Mike Hilton said. “We’ve really shown that we can compete and play with anybody, and us defeating them last year, that’s probably stuck around a little bit in their head. They’re coming for us this year, so it’s going to be a good one Saturday.”

Said Brown, “We’re going to come out there ready to fight, too.”