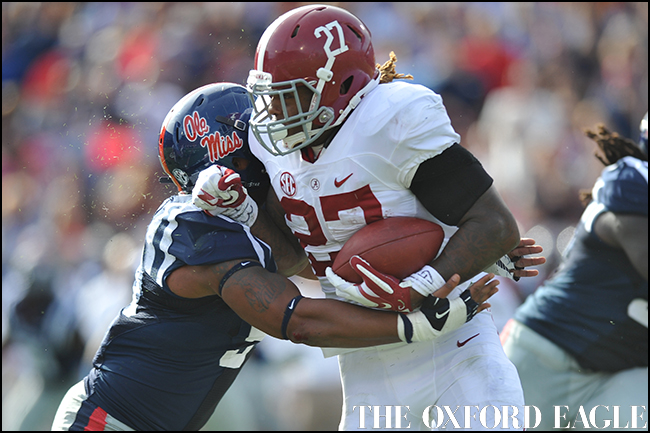 Derrick Henry may be the biggest running back in college football. Kenyan Drake is one of the fastest.

Ole Miss’ defense will have to deal with both of them Saturday night.

Alabama has actually picked up the offensive pace with an average of 74 plays in its first two games, an ironic twist after head coach Nick Saban famously questioned in the past whether up-tempo offenses were a detriment to players’ safety, but the second-ranked Crimson Tide still rely heavily on what’s been one of the Southeastern Conference’s top rushing attacks during Saban’s tenure.

Henry started his season with a 13-carry, 147-yard, three-touchdown performance against Wisconsin and added three more scores on the ground last week against Middle Tennessee State. With Alabama’s quarterback situation still in flux — Saban still hasn’t named a starter between Jake Coker and Cooper Bateman for Saturday (8:15 p.m., ESPN), though Coker has started the first two — the Tide have leaned even more on Henry, who’s got 14 more carries than anybody else on the roster.

He’s worn defenses down, slicing through arm tackles to rip off long runs. His longest is a 56-yard score early in the third quarter against Wisconsin.

“Only one I can compare him to is (former Georgia running back) Todd Gurley, and he’s still not quite as big as Henry,” fellow safety Chief Brown said.

Said Hilton, “You’ve got to try to cut him down. You can’t tackle him up high. He’s too strong, he’s too wide.”

But Henry isn’t the only option for the SEC’s fifth-ranked rush offense.

The 6-foot-1, 210-pound Drake complements Henry’s thump with a rare blend of speed and quickness. The senior, who’s back from a fractured leg that cost him most of last season, is averaging 7.3 yards on his 16 carries with his longest going for a 43-yard touchdown against the Badgers.

Drake is just as big of a weapon in the passing game as offensive coordinator Lane Kiffin tries to find mismatches for the fleet-footed Drake against linebackers and safeties. He’s caught seven passes for a team-high 139 yards, including a 69-yarder against MTSU as part of his 203 all-purpose yards.

Ole Miss didn’t see Drake after the first half of last year’s meeting between the teams as it was against the Rebels that he suffered his injury.

“They’ve got playmakers that make them who they are, which gives them some explosive runs from those guys,” Ole Miss coach Hugh Freeze said. “So it’s not just (Henry), but you’ve certainly got to tackle him low. He’s big and physical, but you also have to be aware of where (Drake) is and all their other weapons.”

Ole Miss’ approach is to “gang tackle,” Hilton said, but the Rebels first have to be in position, something they’ve struggled with against inferior competition. UT-Martin and Fresno State combined for 279 rushing yards in Ole Miss’ blowout wins, most of those coming on long gainers against backups.

But it’s something Freeze said the entire unit needs to clean up.

“No. 1 would be the defense getting lined up,” Freeze said when asked what area needs to be improved the most this week during practice. “We need to limit those explosive plays that happen because we are not lined up properly or not doing our assignment.”

It could be the difference in a first down and a touchdown Saturday.

“If you have the wrong guy in the wrong gap, it can bust any second with those type of guys in the backfield,” Hilton said.