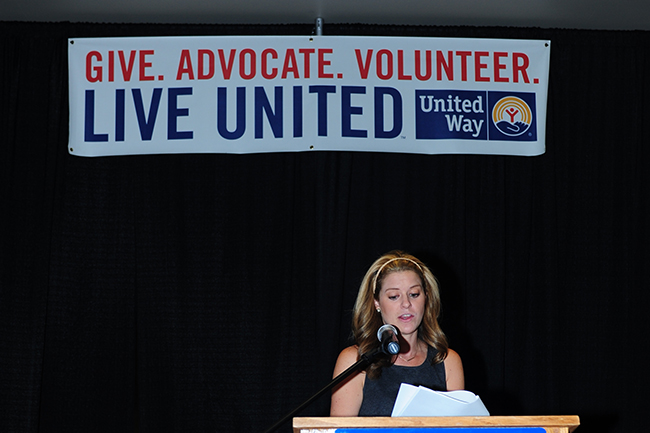 United Way of Oxford and Lafayette County kicked off its annual campaign Wednesday with an emphasis on “why we live united.”

Residents who have been = assisted by United Way organizations and those who are involved with making the nonprofit succeed spoke at the Oxford Conference Center  about what United Way means to them during the launch of the campaign, which has a goal of reaching $540,000.

Sylvia Stewart was one who spoke about living united, coming off the heels of spending a year with the North Mississippi VISTA Project to give back to her country and community.

“As a military kid I was able to travel all across the United States and the world, but I fell in love when I finally moved to Oxford to attend the University of Mississippi,” she said. “I chose to remain in Lafayette County for my term, not only because I love the area and community, but because I saw the amazing opportunities available here and I thought I could help make them accessible to everyone.”

During her year of volunteering Stewart was able to help with programs like Interfaith Compassion Ministry that helps get people in need on their feet.

“From the beginning, United Way has been a vital partner with ICM. Due to difficult economic times countless individuals and families have found themselves in dire straights,” said ICM’s director, Lena Wiley. “Thanks to the support of the United Way and this generous community we’ve been able to assist these neighbors through crisis situations with utilities, rent mortgage, medication, items for the homeless and transportation.”

Wiley said thanks to United Way funding, ICM provided stability to 3,580 families in the L-O-U community.

“I’ve been doing this for more than 15 years and it’s hard, but I’m still here because I love and care for my community,” she said. “And I want everyone to have the same feeling, and that’s why I live united.”

A wide variety of local organizations United Way takes care of were represented at the kickoff.

“We were thrilled with the turnout — not just with the number of people who joined us but also with the diversity of the businesses and community groups that were represented,” said Executive Director Alice Ricks. “There were many familiar faces as well as some new folks, which is exactly what we hope for.”

A theme of the event was working together to meet the needs of the community, and giving, even if it’s $5 or $5,000 because 99 percent of donations stay local.

“Together, and with the help of everyone in this room, we are going to take the campaign to new heights,” said campaign co-chair James Harper. “New donors, new fundraising records, new ways to embarrass workplace campaign leaders continues, all in the name of a good cause.”