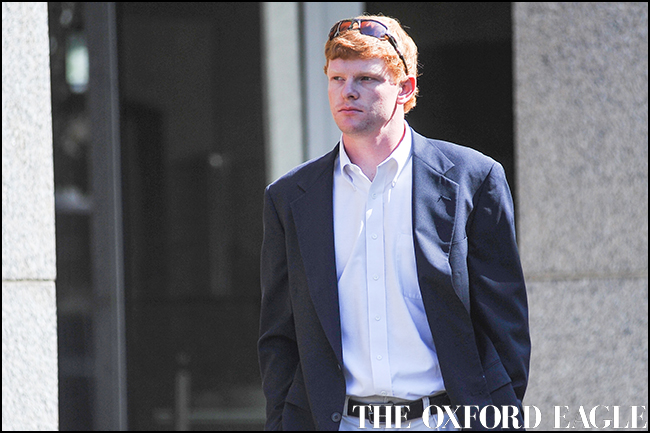 Former University of Mississippi student Graeme Phillip Harris leaves federal court after being sentenced on a charge of using a threat of force to intimidate African-American students and employees at the university, in Oxford, Miss. on Thursday, September 17, 2015. Harris, of Alpharetta, Ga., was charged in connection with a noose placed on a statue of integration pioneer James Meredith.(AP Photo/Oxford Eagle, Bruce Newman)

A former University of Mississippi student was sentenced to six months in prison Thursday for his role in a racially charged incident on the Ole Miss campus in February when he and two others hung a rope and Confederate flag on the James Meredith statue on campus.

U.S. District Judge Michael P. Mills ordered Graeme Phillip Harris to report to prison on Jan. 4. After he serves the six months, he will spend one year on supervised probation. Mills also ordered Harris to perform 100 hours of community service.

Harris, 21, pleaded guilty in June to a misdemeanor charge of using a threat of force to intimidate black  students and employees.

Prosecutors say he and two other former students placed a noose on the statue of James Meredith, a black man who integrated Ole Miss amid rioting in 1962.

A second man, Austin Reed Edenfield, was scheduled to plead guilty Wednesday. That hearing was continued. The third former student, Arthur McCarty, has not been charged and prosecutors say it’s unlikely he will face charges since his role was minimal and he cooperated with the investigation.

James Meredith was the first black student at the University of Mississippi after a court order was issued, forcing the college to permit him to enroll for classes in 1962. Armed federal agents escorted Meredith to class for his own safety. The agents were attacked, and an all-night riot, which claimed two lives, ensured. Federal troops were called in to stop the rioting and restore calm on the Ole Miss campus.

Before Mills passed down his sentencing Thursday, he asked Harris’ attorney, David Hill, if he had any objections in the presentence report. Hill said he and Harris denied making the statement, “white power,” when a maintenance man passed him and Edenfield when they were returning to their fraternity, Sigma Phi Epsilon, after hanging the flag and noose.

Prosecutors asked Edenfield to take the stand and asked him about the events on Feb. 15. He said he, Harris and McCarty had been drinking heavily at the frat house and were “pretty drunk” when Harris came up with the idea they would soon regret after being arrested.

“We decided to put a rope and flag on the James Meredith statue,” Edenfield said, adding it was Harris’ idea first. “(Harris) said it was to make a statement — that people would talk about it.”

“I grabbed the rope and put it on the statue,” Edenfield admitted.

Edenfield said the two returned to the fraternity house where they continued to drink. McCarty fell asleep and Harris and Edenfield decided to go back to look at their handiwork and grab some food at the J.C. Commons. That’s where they passed the maintenance worker and Edenfield stated that Harris called out, “white power.”

“I pushed him for giving us away,” Edenfield said.

Before his sentencing, Harris apologized for the pain his actions caused the black and Ole Miss communities.

“I apologize to my family,” he said. “I’ve hurt a lot of people and I can’t change that. But I’m willing to do anything to change. I hope to move on from here. I’m truly sorry to anyone I’ve offended.”

Mills pointed out a few of Harris’ other brushes with the law, most recently in May when he was arrested in Georgia for being a minor in possession of alcohol. He was also arrested in 2011, when he was 17 for possession of alcohol and disorderly conduct and again in 2012, but that case was dismissed. He also received several driving tickets, including following to closely and not yielding.

Harris is currently attending college, but the school was not released. Mills ordered Harris to turn himself into prison on Jan. 4, to give him time to finish the semester.

In a document filed by Hill before the sentencing, he suggested Harris’ resentment toward people of color began when a black football coach failed to make him starting quarterback as was promised and instead selected a black quarterback.

His attorney says the incident left Harris with a “bitter taste in his mouth” for not being allowed to compete for the starting position.

That hatred and disrespect was cultivated by the fraternity that he described as a “segregation club, a disgusting organization promoting a disgusting culture.” Hill said Harris’ parents felt betrayed by the University of Mississippi for not candidly disclosing how racially exclusive “Geek life” is at the university. They also didn’t realize how readily available alcohol would be to those in the fraternity.

“Alcohol was available in the individual rooms … in the kitchen, in the cabinet and in the refrigerator.”

In an apology letter written by Harris to James Meredith, Harris says the three took the actions because they were upset about the removal of Colonel Reb as the school’s mascot.

After the hearing, Hill said he was disappointed in the sentence.

“I am very surprised, professionally, for two reasons,” Hill said. “First, from my own professional experience, few federal misdemeanors result in prison time, and second, I thought we had made a strong pre-sentence showing justifying an alternative sentence, either outright probation or home detention, specifically considering Graeme’s own efforts at moving forward with his life in positive fashion and considering the strong support network in his home and community to aid and assist him in growing and moving forward from this completely thoughtless and insensitive act.

“Harris is a very positive and focused young man. He wants to succeed in life and he will. He has personally grown tremendously from this self-imposed learning experience, and he will continue to do so.”

On campus, students Jessica Moore and Elizabeth Hurdle agreed Harris should be punished for the “stupid” act.

“I think six months is a very reasonable amount of time to be locked up,” Moore said. “I’m honestly just glad they’re doing something about the situation and not letting him get away. It shows that times are hopefully changing.”

Hurdle said she thought six months was “kind of harsh” but that he definitely should have been punished.

“I’m glad the university didn’t ignore it though,” she said. “I think he should have been punished, definitely. But I think it’s different when you do something with the intent to hurt someone and when you just do something stupid. I don’t think both should be punished the same way. I don’t know what his intentions were though so the punishment may be 100 percent justified.”