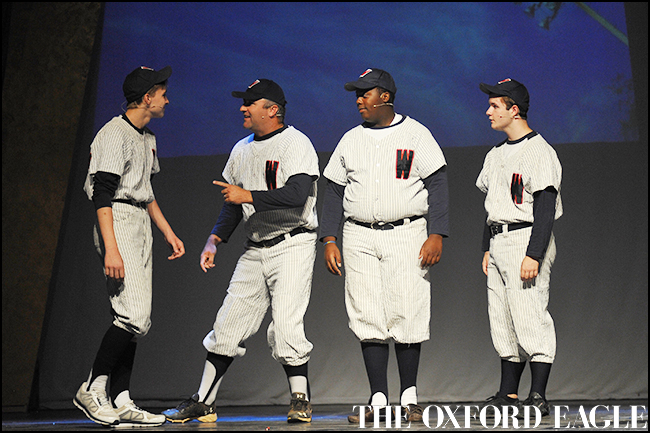 Oxford High School’s theater program will be performing “Damn Yankees” this week as part of their production lineup for the theater season. “Yankees” will be one of two musicals Oxford High produces this year.

“Damn Yankees” will be playing in the Kayla Mize Auditorium located at Oxford Middle School at 7:30 p.m. each evening beginning tonight through Saturday. Tickets are $10 for adults and $5 for any student, which can be purchased at the door.

John Davenport, director, said it has been a challenge to put together a production of this size in a short amount of time, but he wanted to take advantage of a weekend when there was not a major football game.

“It’s an extremely short amount of time to put a play of this size together,” he said.

Davenport was inspired to put the production together when Oxford High School’s baseball team won a state championship. The play itself is set around an older man who makes a deal with the devil in order to help his favorite baseball team beat the New York Yankees. Keeping with the original context of the play, Davenport cast one of the championship players and the current baseball coach for Oxford High as main characters.

Duncan Graeber, 17, plays one of the lead roles in the play and is also on the baseball team.

“It’s really cool to be apart of something that is honoring our season last year,” said Graeber.

Graeber is a junior in high school and said he absolutely plans to be involved with more productions while still in school.

Coach Chris Baughman was involved in theater during his high school days when he played in “Grease” two seasons ago. Since coaching at Oxford, he has been involved in some of the productions. He was most recently in the high school’s production of “Grease” where he played an older character than he did before.

Baughman said the production of “Damn Yankees” has been humbling. He said his part as the baseball coach in the play is probably easier than the other cast members, but he did supplement his coaching experience by refreshing his theater skills.

Baughman looked up YouTube videos of older versions of the play and read some character analysis on the part. He was concerned with becoming the classic 50s baseball coach to a tee.

Davenport’s production. He said, “He is by far the best at what he does. I’m just honored to be apart of it.”

Faculty and students alike are cast members. The play has 35 cast members and 20 crewmembers; 11 of those are faculty.

‘Art on the Move’ set