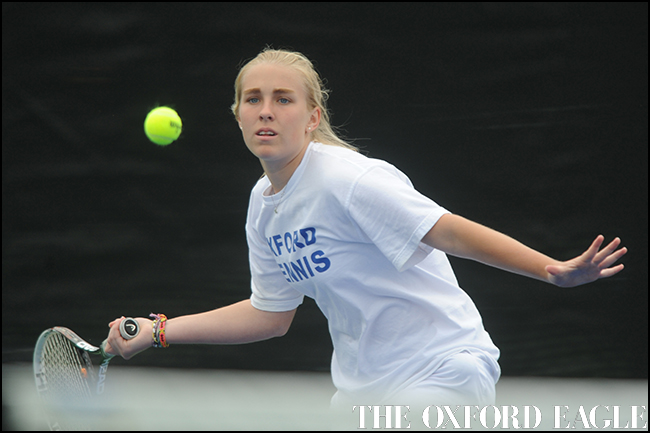 An Oxford High tennis team duo is making another trip to Chattanooga, Tennessee, this weekend to represent their state.

It will be Jones’ second year playing in the tournament and Vaughn’s third consecutive appearance.

Last year, team Mississippi finished second in the Bronze Division, losing to Louisiana but ahead of third-place Arkansas.

“It’s a pretty big deal,” Jones said. “It’s special to be able to be one of the top people in the state to go and compete against all the southern states.”

Jones won a couple of her doubles matches but was unable to score a victory in singles play. With a year of experience under her belt and knowing what to expect in a regional tournament such as  the Southern Cup, Jones expects to improve her record this year.

“I played in the same age division last year as this year, but now I’m a year older and still in the same division,” Jones said. “I should be able to handle the competition a little bit better.”

The age groups are 13-14, 15-16 and 17-18. Last year, Jones and Vaughn competed in the same age group and were teammates for doubles matches.  This year, Jones, 16, and Vaughn, 17, will not have that same opportunity, but having a familiar face around is still a positive in their eyes.

With this being Vaughn’s last chance to participate in the event, there are a few personal goals she wants to accomplish on top of the team goal of winning.

The trip to Chattanooga is two-fold for Vaughn. When she is not playing for her state on the court, she is going to take time to visit Sewanee: The University of the South. Vaughn is interested in attending there, and the feeling is slightly mutual at the moment between her and the university. She is hoping to increase its interest this weekend.

“That’s why this weekend is really important to me,” Vaughn said. “If I improve my ranking, then that just makes the college recruiting that much easier.”

Vaughn is taking a couple extra days to visit with the Sewanee tennis team, and coaches are not sure if they will come watch her play or not.