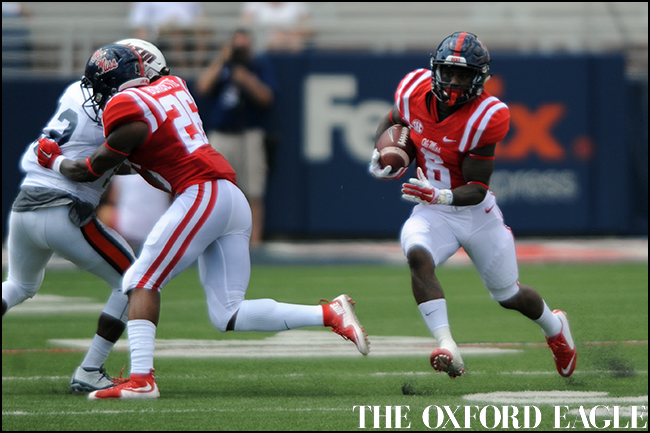 “If you can’t stay balanced,” Freeze said, “then Alabama can absolutely stop you.”

Though it’s still hard to tell, Freeze is hoping he’s finally got a running game that can help the Rebels do that when No. 15 Ole Miss runs into its stiffest competition yet against No. 2 Alabama Saturday (8:15 p.m., ESPN) in both teams’ Southeastern Conference opener.

Ole Miss, which finished 10th in the SEC in rushing yards per game a season ago, is the league’s top rushing team, averaging 277 yards on the ground in its first two games. All four running backs, led by senior Jaylen Walton’s 103 yards, already have at least 81 yards for the Rebels (2-0), who are ripping off 7.8 yards a carry.

But that production has come against Tennessee-Martin and Fresno State, two opponents who are worlds away from the Crimson Tide’s laundry list of former five-star recruits. Alabama has had one of the nation’s top-10 run defenses for seven straight years and has allowed just 63 yards a game on the ground this season, good enough for 12th nationally.

“Of course Alabama brings up a different challenge this week, and we’ll get to see where we are,” Ole Miss running backs coach Derrick Nix said.

The Rebels haven’t rushed for more than 80 yards against the Tide since Freeze’s tenure began in 2012. Even in last year’s upset win, Ole Miss mustered just 76 yards on the ground, instead relying on the experience of quarterback Bo Wallace to pepper a vulnerable Tide secondary with passes in the middle and deep parts of the field in the come-from-behind victory.

But this year’s quarterback, Chad Kelly, will make just his third start for the Rebels on Saturday and his first on the road in one of the more raucous environments in the country. He’ll need some help to slow down an Alabama defense that will try to make him as uncomfortable as possible.

“We’re much better when we can (stay balanced),” Freeze said. “It sure would be nice if we were having some success running. I think that benefits us all the way around.”

Challenge for youngsters
If everything stays the same up front, Kelly and the backs will have some young faces trying to hold off a defensive front that Freeze said is “as talented as I’ve ever seen.”

The offensive line is preparing to once again play without left tackle Laremy Tunsil, who’s been held out of the first two games as Ole Miss continues to work with the NCAA on an eligibility matter and could be out a lot longer. ESPN’s Chris Low reported this week that the NCAA’s investigation centers on a loaner car Tunsil reportedly borrowed for too long from Cannon Motors in Oxford — a corporate sponsor of the athletic department — while his car was undergoing repairs.

Though the report didn’t specify how long Tunsil kept the vehicle, a player must miss 30 percent of his team’s games for accepting impermissible benefits exceeding $700, according to NCAA rules.

Tunsil’s absence has shifted Fahn Cooper from right tackle over to left with redshirt freshman Sean Rawlings getting the start the first two games in Cooper’s place. True freshman Javon Patterson has held down left guard with Rod Taylor and Aaron Morris working their way back from injuries.

With a viable option behind Robert Conyers at center in senior Ben Still, Ole Miss could move the more experienced Conyers to right tackle, a position he’s cross-trained at for more than a year, to give itself a better chance to open running lanes and keep Kelly upright Saturday.

Freeze wouldn’t commit to a certain position for Conyers this week, saying only that he’ll play his best “nine or 10” linemen. Rawlings and Patterson fall in that category, and some of the veterans up front have spent the week trying to prepare the youngsters for what they’re about to experience.

“It’s just basically you’ve got to work a lot harder to move these guys out the way than you did the first two teams that we had to face,” senior guard Justin Bell said. “Just getting them ready to be physical more than anything. I feel like they’ll be the most physical team we’ve faced so far this year, and you’ve just got to get ready for that.”

Bell said members of the line made a point to get more physical in the offseason. They’ve also altered their aiming point when taking on blocks while running backs have changed the track they take when hitting holes in an effort to create more space to operate.

“We’ve had success with it so far,” Nix said.

Ole Miss will have a much better gauge of the extent of its improvement on the ground come Sunday morning.

MORE OF THE SAME: Commodores expect ‘playoff’ atmosphere at…