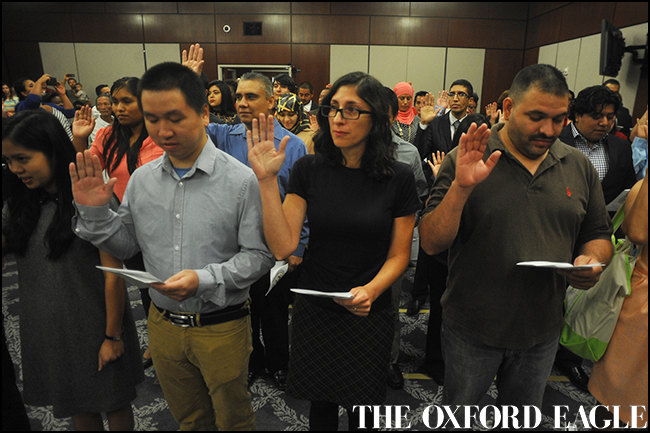 New citizens take the oath of citizenship during a Naturalization Ceremony in U.S. District Court in Oxford on Thursday.

Many of the new citizens were overjoyed after giving their sworn oath of citizenship.

“We are very excited and very proud to be U.S. citizens,” said Adolfo Mumiz, who was joined by his wife Dulce, in becoming naturalized citizens. “Like the judge said in court, this country has given me an opportunity to raise my family and work. I will do my best to fulfill my obligations.

The Mumiz family is originally from Mexico but now call Olive Branch home.

“I am very happy and committed in every sense to this country,” Adolfo said. “I consider it an honor and privilege to serve and work in my community.”

His wife echoed his sentiments.

“And now I hope our son will hopefully go to Ole Miss,” she said. “We love Oxford.”

Prior to receiving the oath from the Clerk of Court David Crews, Ole Miss Athletic Director Ross Bjork handed each of the new citizens a coin depicting  the Ole Miss logo on one side and the phrase “hotty toddy” on the other as a token of appreciation. Bjork was also the keynote speaker and reminded them of the responsibility and opportunity they are being afforded and to take advantage of it.

“You can only control today,” Bjork said. “Make today our masterpiece. Today matters. Believe in yourself more than others do and find your purpose with your new platform.

Following the ceremony, Aycock  and Biggers reminded the new citizens of their responsibility to participate in government by voting and serving on juries when called.

“It’s a two-way street,” Aycock said. “Assume your share of the responsibility.”

Sergio Valenzuela, who came to the U.S. from Mexico and now calls Southaven home, said it feels good to be called a U.S. citizen.

“I’ve been working hard and hope to make the best impact I can,” Valenzuela said.

Wafa Mohammed Itayem has been living in Southaven for the last five years and is now looking forward to continuing her education at Northwest Mississippi Community College. She has a bachelor’s of arts degree she earned in her native Jerusalem.

“I’m a psychologist and now I want to go to school here,” Atayed said. “There are lots of things I want to do and give back to this country.”