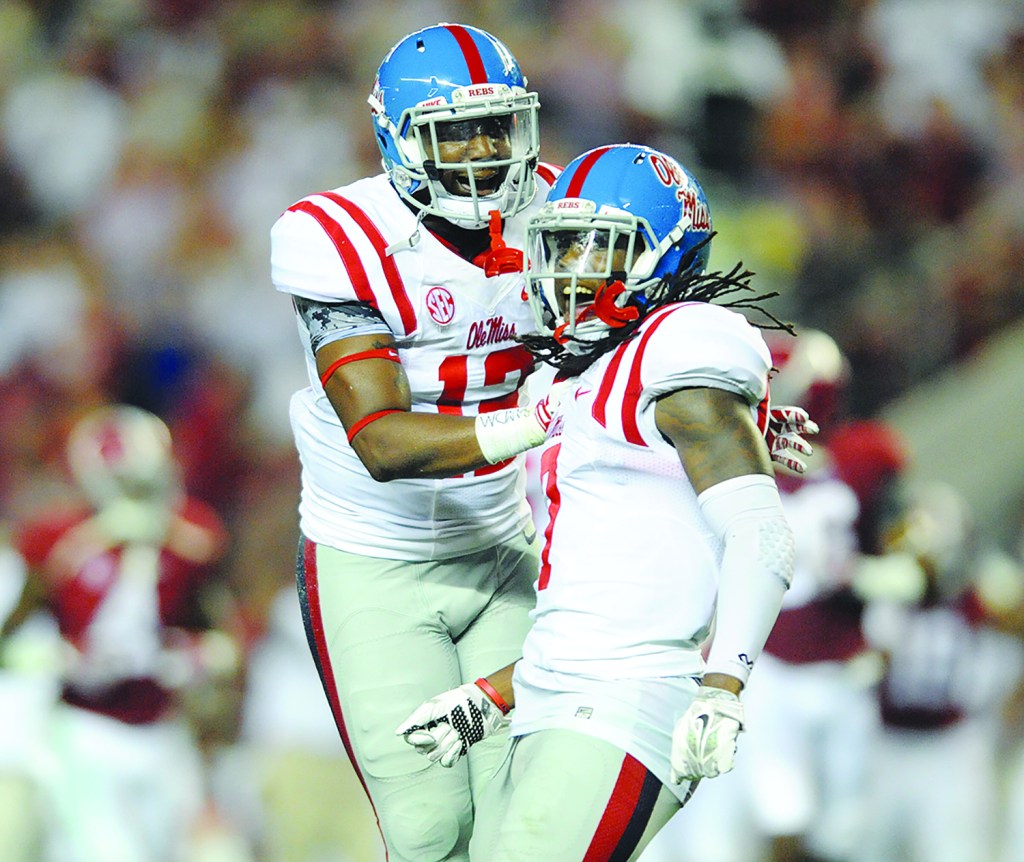 Ole Miss defensive back Trae Elston (7) celebrates his interception with defensive back Tony Conner (12) vs. Alabama at Bryant-Denny Stadium in Tuscaloosa, Ala. on Saturday, September 19, 2015. Ole Miss won 43-37 for its second straight win over the Crimson Tide. (Bruce Newman)

TUSCALOOSA, Ala. — But what does it all mean?

That was the question being thrown around last week as frequently as a blindfolded man’s stick at a piñata party.

Sure, Ole Miss putting up 70-plus points in back-to-back games to start the season was impressive, but exactly how much could be gleaned from that being that the Rebels barely had to break a sweat doing it against Tennessee-Martin and Fresno State?

Oh yeah, Chad Kelly looked even better than the junior college All-American he was at East Mississippi Community College a season ago, and a Rebel running game that finished near the bottom of the Southeastern Conference last year was ahead of everybody in the league after two weeks.

How many offenses wouldn’t look great against UT-Martin and Fresno State?

And that defense? The same fast, swarming, take-the-ball-away-from-you-basically-whenever-we-want-to unit that forced 32 turnovers last season? It created five takeaways and scored 18 points in the first two weeks, but again, UT-Martin and Fresno State.

But the Rebels left no doubt Saturday about exactly what kind of team they are, and that’s a team that has as good a shot of any at being one of the last four teams competing for a national title.

Ole Miss took its stingy yet rested defense along with its high-flying yet untested offense into a place where Alabama usually wears down both on its way to another victory in front of more than 100,000 lunatics who make Bryant-Denny Stadium one of the most difficult places to hear yourself think, much less execute plays in an organized fashion.

But for once in its program’s history, Ole Miss was the enforcer in Tuscaloosa. It started on the opening kickoff and ended with Marquis Haynes’ lick on Alabama quarterback Jacob Coker that resulted in a game-saving interception on the Crimson Tide’s second to last possession.

Kelly — the horrendous decision to float a half-hearted pass that went from “What are you doing, Chad?,” as Ole Miss coach Hugh Freeze referred to it afterward, to a lucky, bouncy 66-yard touchdown pass aside — rarely looked rattled by his surroundings.

With the stadium practically shaking early in the fourth quarter after Jake Coker’s second touchdown pass got Alabama back within a touchdown — and with a Laremy Tunsil-less offensive line that finished with freshmen Sean Rawlings, Javon Patterson and Jordan Sims on the field — Kelly came back with a heady play on the Rebels’ next play, sucking the Tide’s aggressive defense up as much as possible before dumping a pass off to Cody Core for a 73-yard answer. His 24-yard touchdown strike to Laquon Treadwell on Ole Miss’ next possession was the silencer.

But Alabama continued to punch back against a gassed defense, which fell victim to the Tide’s pace in their frenetic attempt to catch up as well as all the short fields it set its own offense up with thanks to five more forced turnovers. Yet the unit came up with the stops it had to have on back-to-back possessions at the end.

As a result, the Rebels got an outcome that’s mostly foreign to both them and their opponent. Ole Miss is now 2-25 in games played against Alabama in Tuscaloosa and hadn’t won here since 1988.

The Rebels had never put up 43 points on the Tide in their home stadium until Saturday, and the last time Alabama lost to anybody in Tuscaloosa? Johnny Football and Texas A&M in 2012.

This is just the beginning of the marathon that is a season in the SEC, and anything can happen in this league. But it’s been too long for just about anyone to remember the last time Ole Miss controlled a game against a team that’s been one of the sport’s top dogs as long as Nick Saban’s been the coach.

Whether Ole Miss actually takes part in the College Football Playoff three months from now remains to be seen, but the Rebels showed Saturday they’ve got all the ability.