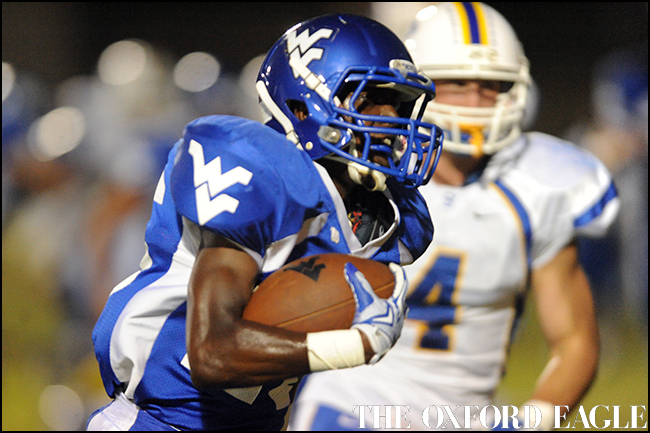 WATER VALLEY — Water Valley hung around for a while with another team head coach Brad Embry feels is getting his squad ready for the region portion of its schedule.

Those were about the only positives for the Blue Devils on Friday.

Water Valley dropped its third straight game with a 38-7 loss to Senatobia at Bobby Clark Field. The Blue Devils (1-4) stayed close with the Class 4A Warriors (4-1) for the first 24 minutes but couldn’t keep up in the second half, getting outscored 22-0 over the final two quarters.

The Blue Devils have been outscored 114-38 during their losing skid.

“I was proud of how we hung in there with them in the first half and played with some emotion and fire,” Embry said. “We’ve just got to be able to do that for four quarters. We haven’t got there yet, so all we can do is keep working.”

Senatobia turned a 16-7 halftime lead into a runaway victory by wearing the Blue Devils down with a ground game that churned out 358 of the Warriors’ 425 yards, 239 of those coming in the second half. Cooper Stevens’ 8-yard touchdown pass late in the third quarter put Senatobia up 22-7 before a 35-yard touchdown run by Deanta Sipp and a 50-yard scamper by Maurice Toney on back-to-back possessions put the game out of reach.

Toney also had first-half scoring runs of 34 and 12 yards and was the Warriors’ top rusher with 155 yards on just 11 carries. Sipp added 82 yards on 10 carries while K.D. Chapman chipped in 71 yards.

The Blue Devils took their only lead five plays after Kirkland Horton intercepted Stevens midway through the first quarter on a 3-yard reverse to Mark Gooch, but the offense produced just 8 yards in the second half and 81 for the game. Water Valley gave the Warriors their first two points of the night with a snap out of the back of the end zone on its second possession.

Stevens’ touchdown pass and Sipp’s scoring gallop in the third quarter came after interceptions by Water Valley quarterback Ty Varner, who threw his first two since the season opener.

Varner finished 6 of 18 for 79 yards, and the Blue Devils netted just 2 yards rushing on 19 carries with three of those being sacks.

“We’re still looking for it,” Embry said of his team’s offensive identity. “We can’t get anything going in the run game, and that’s some of us and some of them, just to be honest with you. We want to run the ball, and we’ve got to be able to run the ball.”

Senatobia is the second consecutive opponent the 3A Blue Devils played in a higher classification. Water Valley has also played a pair of top-5 teams in the 2A classification in Calhoun City and Eupora.

A trip to Winona awaits the Blue Devils this Friday before Region 2-3A play starts for them Oct. 2 at Charleston, but Embry said his team is getting a taste of what’s to come.

“That team right there, they played Charleston and it was a good game,” Embry said of Senatobia. “Charleston’s in our region, and they’ve been the cream of the crop in our region for three or four years. That’s probably a lot like what we’re going to see in Charleston.”