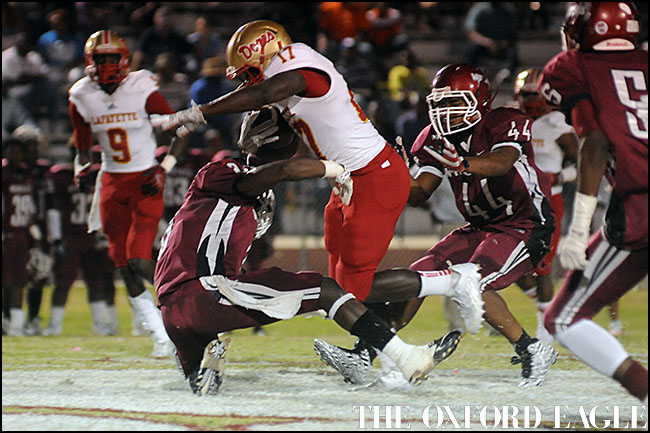 LOUISVILLE — The more-than two-hour drive did not faze Lafayette. The Commodores used a heavy dose of Tyrell Price as well as a newcomer to the backfield to dominate Louisville, 27-10, Friday night.

Lafayette (4-1) flexed its muscles in the ground game on its first possession of the game. Price carried the ball four out of the seven plays on the drive, capping it off with a 2-yard touchdown run. Price was not finished as he found the end zone two more times in the first half.

On Lafayette’s third possession, Price scored on an 18-yard run and then from 4 yards out on the next drive. He ended the night with 16 carries for 156 yards and three touchdowns. Price also caught one pass for 15 yards.

In his first five games of the season, Price has racked up 12 touchdowns on the ground and gashed opposing defenses for big gains. During the summer, Price hit the gym and beefed up, making himself not only a speed threat but a power run threat on top of it.

“When we came out here, we saw how (Louisville) was set up and we went after that,” Price said. “(Getting bigger) is a big reason why I get those yards. Being big and being able to overpower some people that are smaller than me. It’s why I worked in the offseason.”

Getting a chance
Tay Tay Owens scored the last Lafayette touchdown with an 11-yard run to begin the second half, but it was the play of sophomore running back Jamarcus Quarles that made the biggest impact.

After having a good week at practice, Quarles had his number called 11 times and delivered for 55 yards, including a 26-yard run where he steamrolled Louisville defenders. It is a development that Lafayette hopes turns into three-headed monster in the backfield heading into region play in two weeks.

“We know he’s a good running back through practice and JV games, and we’ve been trying to get him to where he could get some reps,” Lafayette coach Eric Robertson said of Quarles. “We just made a commitment to it this week in practice to get him in some. I’m excited about that. Having another strong, powerful back is a 1-2 punch.”

Commodore quarterback Will Ard did not throw for a touchdown for the second straight game, but with Price and Owens in the backfield, it was not an issue. The junior completed 12 of 16 passes for 187 yards and one interception, his third of the year.

“Will didn’t throw the ball well tonight, and he knows that,” Robertson said. “We’ll get right back on him, and he’s capable of making those throws. We’re happy with Will. He does a good job of managing the game for us, and he made good throws, too.”

Dominant ‘Dores
It was another night of stingy play by the Lafayette defense. Louisville (3-2) struggled in the first half, going three-and-out on its first three possessions. The Wildcats only crossed midfield once in the first half and only reached Lafayette’s 45-yard line when they did.

“We were just ready to play,” Robertson said. “I think our defensive front played really well. Our defense goes how our defensive front goes. If they play well, we play well.”
Louisville’s only points on offense came from a 27-yard field goal with less than a minute remaining by kicker Corey McCullough. It was the Wildcats’ second field goal attempt of the game after a 48-yard try was blocked earlier in the second half.

The Wildcats’ only touchdown came on defense when Ross Ingram’s pass was intercepted by Isaiah Latham, who returned it 80 yards for the pick-six.

It does not get any easier for Lafayette next week when the Commodores travel to Charleston on Friday.