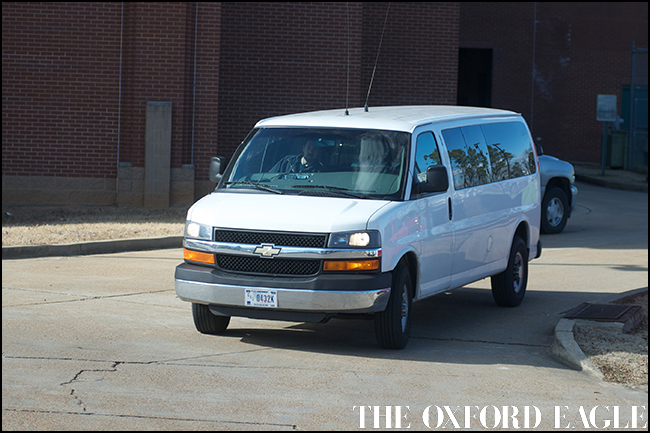 A federal prisoner is transported from the Lafayette County Detention Center to U.S. District Court in 2014.

Lafayette County is bucking a nationwide trend with its jail under-crowding problem, which has caused a tax hike.

A lack of federal inmates is causing funding issues for the Lafayette County Detention Center and is a key reason why county officials this month raised the millage rate for the first time in a decade.

It came to light last week as the Board of Supervisors approved the county’s $45 million budget for the 2016 fiscal year that millage rates would have to be increased to offset the funding loss from the federal inmate housing program that has slowly dwindled since spring 2014.

When the current Lafayette County Detention Center opened 22 years ago, officials at the time envisioned an opportunity to improve the jail facility while simultaneously generating another revenue stream when the U.S. Marshals Service agreed to house inmates in the new jail.

Lafayette County was one of the first to provide housing for federal inmates and over two decades the number of inmates the U.S. Marshal’s Service placed in the facility increased.

According to county officials, revenue rose to as much as $2 million annually with the federal inmate housing program.

“We were getting most of the prisoners in the Northern District,” Sheriff Buddy East said. “Sometimes we’d have more than 120 here.”

But then the number of federal inmates being housed began to dwindle a few years ago as more counties built modern detention facilities and became involved in the federal inmate housing program, which pays $45 per day to house the inmates. It forced Lafayette County to share a “piece of the pie,” according to East.

East added that some of the reduction could have been the result of the U.S. Marshal Service having more planes to fly prisoners from place to place.

“They’re also moving them out faster,” East said. “They used to sit here three or four months before being moved to a federal prison. Now, they’re only here a few days – maybe a week.”

The detention center is also required to reserve 50 beds for federal inmates, according to East.

County Administrator Joe Johnson said last week as supervisors finalized the budget, that the once-lucrative housing program lost $800,000 in revenue, which caused the board to move around millage rates within the budget and increase the millage rate for the first time in 10 years.

Lynzey Donahue, Office of Public Affairs with the USMS, said there are various reasons why there are fewer federal inmates being housed locally.

“We make housing decisions based upon various factors such as security, availability of bed space in a particular facility, special needs of prisoners, court appearances and other similar factors,” Donahue said. “The decline in prisoners being held in Lafayette County is mainly due to, one, a 34 percent decline of overall USMS inmate prisoner population in the district since 2011, and, two, an effort to house prisoners in close proximity to where their cases are being tried.”

As expected, county officials are not pleased the housing program has been reduced and required local taxes to be raised to make up the difference.

“I’m not trying to blame anyone, but we were one of the few willing to participate with the federal government,” Supervisors President Jeff Busby said after passing the county budget. “When you take an almost $800,000 hit, that’s hard to overcome.”

“Any way you look at it, it affects everyone,” East said. “They corrected a problem for them and created another for us.”