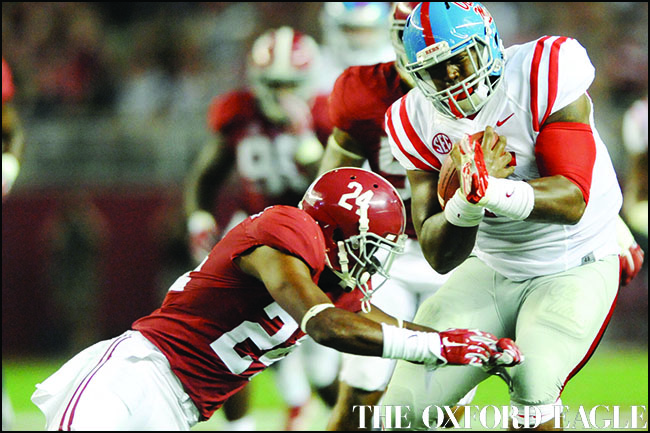 TUSCALOOSA, Ala. — Ole Miss generated quite a few explosive plays on offense to beat No. 2 Alabama and improve to 3-0 on the season. One of the more important ones came in the fourth quarter when a mounting Crimson Tide comeback seemed to building in momentum.
Chad Kelly connected with Cody Core on a play-action pop pass for a 73-yard touchdown. You may have seen this play run by Gus Malzahn and his Auburn Tiger offense against Alabama in 2013. On a pop, or run-pass-option play, the offensive line blocks for a specific run play while the receivers try to run behind a secondary that is responding to the run threat.

In this case, it was Kelly who lulled the Alabama secondary into believing he was running a quarterback keeper while Core streaked down the sideline. Kelly waited until the last moment to loft a pass over the stunned Alabama secondary, and Core had nothing but open grass to welcome him into the end zone. The play would be flagged and reviewed for an illegal forward pass, but that ruling was overturned and the comeback that Alabama had been building was temporarily halted.

The junior has faced double and sometimes triple teams throughout his Ole Miss career, but that did not stop him from showing up and showing out against Alabama.

Head coach Hugh Freeze said after that game that he has not seen Nkemdiche be more impactful in a game. Nkemdiche was a constant presence in the backfield, registering six tackles, 2.5 tackles for loss and half a sack.

“I thought so tonight, especially when he was not so gassed,” Freeze said. “We had to bring him here and get him an IV, but man, in the first half, I thought he was special. This may be the first that I have seen him finish plays when he had the opportunity to.”

Short work
Short fields turned into points for Ole Miss as the defense gave the offense plenty of opportunities. Ole Miss started drives at the Alabama 17-, 26-, 18-, and 31-yard lines thanks to two fumble recoveries and a pair of interceptions with the Rebels turning three of those drives into touchdowns. The fourth netted them a field goal.

Extra Points
Ole Miss picked up just its second win ever in Tuscaloosa, ending a 12-game losing streak in games played there. … Ole Miss notched its second straight win over the Tide after last year’s 23-17 win. … It’s Alabama’s first loss at home since Texas A&M won at Bryant-Denny Stadium since 2012.

COLUMN: Ole Miss leaves no doubt of status as…