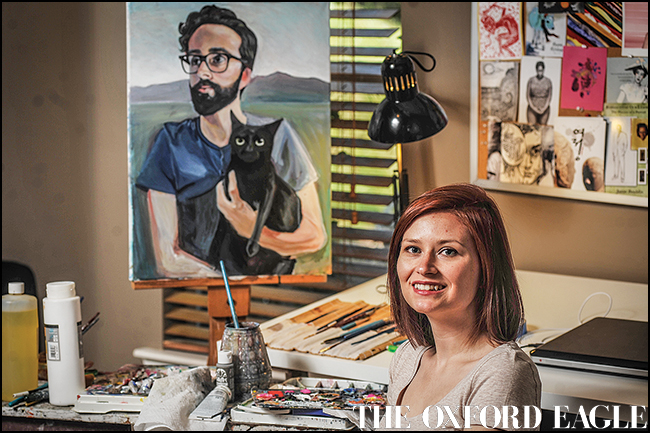 When you think of Mona Lisa, you think of the famous painting that has been immortalized throughout time, and Melanie Munns is gearing up to do that for your average Joes throughout Mississippi.

And in the process she is going to be pushed out of her comfort zone, make friends and get more people interested in art.

The 29-year-old, who has been living in Oxford the past five years, will start out crafting portraits of people — just graphite sketches initially. While doing the sketch, there will be conversation, and Munns will get to know the individual. She will pass along the sketch to the individual but then head back to her studio, where she will do another more developed portrait, incorporating elements of their personality into it. It could wind up a watercolor, a multimedia mix or an elegant portrait. And then it will wind up on a studio wall in an art exhibit.

“I’ve been doing portaits for money since middle school,” she said. “I found it was an easy way to befriend everyone. Everyone wanted to have a portrait done and kept it. I still have people 20 years later saying, ‘I still have your drawing.’ It’s a really easy way to engage people.”

She plans to find the people who have a story and to make her collection diverse.

“I’m also looking for faces of Mississippi you don’t know about,” she said. “I will work with people of different races, demographics, social boundaries. I hope to have a very diverse group. It’s fascinating how people with great stories walk by every day. I want to try to find people that have great stories.”

Not only will her project expose Mississippians to new things, but it will also take Munns out of her everyday routine.

“I’m reaching out to people who aren’t involved in art,” she said. “There’s a lot of people I interact with in town who I don’t see at receptions. It’s putting me out of my comfort zone — asking people for money, having people observe me drawing, engaging the public.”

She has already received one grant to help with some of her supplies but will plod along for more to help cover travel, with the end thought of a book in mind.

Munns usually puts together what she calls “quirky art” with most of it shipping out of town, but this is a whole new kind of project for when she’s not working at the University Museum where she does “a little bit of everything.”

She had an assistantship and then became a project manager of Greeks & Antiquities, and now does research and coordinates the Classics interns. Munns first moved to Oxford to earn her master’s degree in sculpture from the University of Mississippi after attending Ringling College of Art and Design in Sarasota, Florida, near her hometown, and then Seattle for an illustration degree.

“It was cold, dark and rainy like everyone warned me,” she said.

While Munns is your stereotypical artist who is a vegetarian with two cats and doesn’t get out much, she’s active in the arts scene in Oxford and like at work, is involved in a little bit of everything.

She helps plan for area art shows, has been a guest artist at several shows, and does murals and chalk drawings on the Square.

“I’ve been told you need to pick a study and stick with it forever, but that’s not what I want to do,” she said, and is eager to learn on this extensive project.

“You’re not open to critique and observation and don’t have the urgency to meet deadlines when out of formal training,” she said, so this helps keep her craft solid.

She exposes her vulnerability by opening herself up to critique from both the person getting a portrait done, and the arts community examining her work, and she will do the same of her subjects to learn more about them for their painting.

If you look at old Renassance paintings you can see props, settings and certain items of clothing set the scene. They “provided narratives without using literacy,” she said. She hopes for her work to do the same, keeping it a portrait, but using decorative landscape.

She said she can learn much about an individual by facial expressions, items of clothing, body type and more.

“People are the most challenging,” she said. “I do art because I like the challenge of it.”

Munns hopes for multiple shows, with the first coming in the spring, and to provide people with a lasting experience that becomes a first of many exposures to art.

“I’ve found people are really excited to have a portrait done,” she said. “It used to be a luxury — that’s what immortalizes you.”