STEMMING THE TIDE: Rebels hold on for another win over Alabama 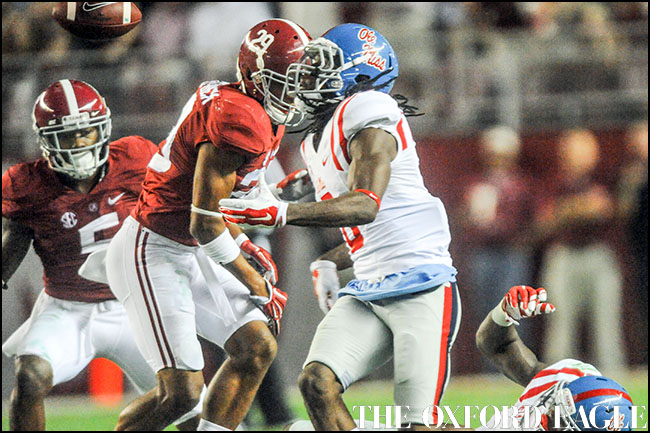 TUSCALOOSA, Ala. — Sometimes a little luck is needed for things to change.

In Ole Miss’ case, the Rebels will take whatever they can get when playing Alabama on its home field.

They took a miraculous touchdown pass and another one that came just in the nick of time, and No. 15 Ole Miss notched its second straight win over No. 2 Alabama with a 43-37 victory Saturday in front of 101,821 at Bryant-Denny Stadium.

It was just the second win ever in Tuscaloosa for the Rebels, who had lost 12 straight on the Tide’s turf dating back to 1988.

“This one is better,” Ole Miss defensive tackle Robert Nkemdiche said, comparing Saturday’s win to last year’s victory over the Tide. “I just feel like there was so much more on the line, and it’s going to set us up for something great this season.”

Ole Miss (3-0, 1-0 Southeastern Conference) led by as many as 20 late in the third quarter, but Alabama quarterback Jake Coker, who came off the bench for the first time this season in relief of Cooper Bateman, helped mount four late scoring drives to cut the advantage to one score twice. Coker was picked twice but threw for 201 yards and three scores from the second quarter on.

“I thought we had it put away a couple times,” Ole Miss coach Hugh Freeze said. “They just wouldn’t go away.

“It was an emotional rollercoaster.”

Ole Miss’ Chad Kelly threw for 341 yards and three touchdowns, including a 73-yarder to Cody Core where the junior sprinted toward the line of scrimmage and pulled up to get the pass off at the last second. Kelly was flagged for an illegal forward pass, but the call was overturned after replays showed part of his body was still behind the line of scrimmage.

Ole Miss turned C.J. Johnson’s interception on Alabama’s next possession into a touchdown when Kelly connected with Laquon Treadwell for a 24-yard score with 10:02 left in the fourth quarter to put the finishing touches on the second-highest point total Alabama (2-1, 0-1) has allowed under Nick Saban. Alabama’s feverish comeback attempt resulted in a whopping 100 plays, but Ole Miss had enough left to get stops on the Tide’s final two possessions.

“We just found a little left,” Freeze said. “We were drained.”

Ole Miss’ opening possession of the third quarter ended in bizarre points. Robert Conyers’ third-down snap nearly sailed over Kelly’s head, but Kelly corralled it and chunked a pass under pressure that bounced off Treadwell’s hands, off a defender’s helmet and into the arms of Quincy Adeboyejo, who raced 66 yards to give the Rebels a 24-10 lead at the time.

Ole Miss led 17-10 at the half despite averaging 3.4 yards a play in the first two quarters and running 17 less of them than the Crimson Tide thanks to turnovers.

The Rebels scored all of their first-half points off three takeaways, including a fumble by Alabama’s ArDarius Stewart on the opening kickoff that resulted in Gary Wunderlich’s 32-yard field goal. Ole Miss forced five turnovers in all and committed none.

Kelly had a 4-yard touchdown run while Jordan Wilkins scored from a yard out on fourth down for the Rebels’ first touchdown midway through the second quarter.