Why daffodils matter this season 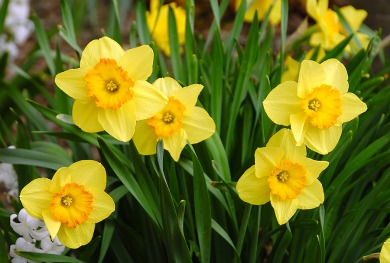 It’s fall and it’s daffodil time — daffodil-planting time, that is.

Plant their bulbs now so their roots will gather strength before winter. More on that later.

Daffodils were called narcissus in Roman times. Narcissus was the guy — a demigod — who loved himself. He fell into a coma and died while pining for himself. Daffodils were long thought to be narcotic (coma inducing) and since the name seemed to fit, it was given to the plant by Pliny the Elder, the noble Roman who wrote the first encyclopedia.

Even before that, the ancient Greeks associated daffodils with bad luck — especially for chicken farmers. They said that if a single flower was brought indoors only one chick would hatch from a clutch of eggs. In Greek mythology, which may or may not be true, Persephone, seductively clad in white daffodils, was abducted by dirty old Hades and his touch turned all the flowers bright yellow.

They called the flowers asphodel, which later, through slurring and strange accents, became daffodil. In some parts of Britain they were called daffadown dilly, but not for long.

The ancient Greeks and Romans were not the only ones holding wacky notions about daffodils. In Maine they believe pointing your finger at a daffodil bud will stop it from flowering. (That should be easy to nullify.) Even sillier, Mainers think if the first flower that opens droops towards the observer, it forecasts nonstop misfortune for the rest of the year. Maybe they no longer believe this nonsense in the rock-bound state — we haven’t checked lately.

The species, being native to meadows and woods, became increasingly popular in Europe after the 16th century. By the 19th century they had become an important commercial crop in Holland, but never caused a daffodil mania. Today daffodils are popular as cut flowers and throughout their long history many thousands of cultivars have been developed.

Early writers were very much interested in the plant’s medicinal properties and — like Caesar Augustus’s fiendish wife Livia — its death-inducing qualities. The plant is totally poisonous. Daffodils produce toxic alkaloids. Some people are allergic to its sap. (My mother always planted daffodils separate from other spring bulbs because of the baleful qualities. And she would never put daffodils in the same vase with other flowers because they made the other flowers expire before their time).

On the good side, this lethal aspect has been exploited in traditional healing. Furthermore, the lethal substance, called galantamine, is now used to treat Alzheimer’s disease. Evolution produced galantamine for good reason. It defends the plant from grazing animals and microbial infection. Squirrels will not eat the bulbs, nor will deer eat the flowers.

Galantamine was first extracted from the snowdrop in the early 1950s after a Bulgarian pharmacologist saw villagers rubbing their forehead with the plant leaves and bulbs to get rid of headaches. In Wales, where the flower is a national symbol, vast acres of daffodils are cultivated for galantamine research.

You may ask why the daffodil is the national symbol of Wales. It is all because of a mix-up between two Welsh phrases. In the 6th century, a band of English soldiers, all dressed up like Welshman, threatened a Welsh village.

The Welshmen pinned leeks (then the unofficial national plant) to their hats to differentiate themselves from the English. The Welsh word for leek was Cenhinen and for daffodil it was Cenhinen Pedr — not much difference, so the confusion was forgivable. If you see a portrait of St. David, the patron saint of Wales, you will notice there are always daffodils somewhere in the picture. David’s best-known miracle was causing a small hill to rise up where he was preaching. But as one wag asked: “Why did Wales needed another hill?”

Going eastward from Wales, in England Daffodils are known as the Lent Lily. This is odd because the timing of Lent varies with the cycles of the moon. Some years the daffs will be long gone before Lent starts. That this has never argued in favor of standardizing the timing of Lent is a liturgical mystery.

As you contemplate buying daffodils, try to find the earliest bloomers. Why? Because early emerging bumblebee queens need to find pollen and nectar to feed their new brood of bee larvae.

Another hint — if you plant the early flowering daffodils in the lawn, their leaves will have finished their appointed task of restoring the bulbs for the next spring by the time that the lawn is mowed. I personally prefer the daffodils with a short flowerscape because they look less ragged as they die down.