MAKING A MOVE: Win over ‘Bama vaults Rebels to No. 3 in AP poll 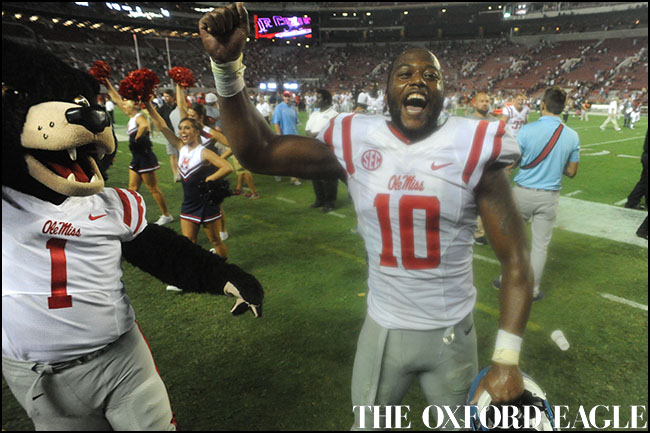 Ole Miss' C.J. Johnson celebrates following the Rebels' 43-37 win over Alabama at Bryant-Denny Stadium in Tuscaloosa, Ala. on Saturday, September 19, 2015. Ole Miss moved up to a tie with TCU for third in the AP rankings released on Sunday.

The Rebels jumped 12 spots to No. 3 in the Associated Press poll released Sunday following their win over then-No. 2-ranked Alabama at Bryant-Denny Stadium. Ole Miss, the highest-ranked team in the Southeastern Conference, tied with TCU at the third spot with 1,345 points and received 11 first-place votes — four more than No. 2 Michigan State — after handing the Crimson Tide their first home loss in three years.

The 43-37 win was just Ole Miss’ second win ever in Tuscaloosa and snapped a 12-game losing streak in the series in games played across the state border dating back to 1988. It’s also the first time in school history the Rebels (3-0, 1-0 SEC) have knocked off Alabama in back-to-back years, but they didn’t necessarily feel like it was an upset this time.

“We certainly think we are at a point now where it’s not a shock,” Ole Miss coach Hugh Freeze said. “I would still say (beating Alabama two straight years) is a surprise to a lot of people. I don’t think it surprises the people in our locker room.”

With other teams fading around them, the Rebels have the look of a team that could compete for the SEC Western Division crown and make their first-ever trip to the league’s championship game in Atlanta in December after stumbling down the stretch last season following a 7-0 start.

Ole Miss owns the tiebreaker and a virtual two-game lead over the Crimson Tide while Auburn, which has tumbled out of the rankings after being a preseason top-10 pick, and Arkansas have already combined for three losses. LSU, which steamrolled Auburn on Saturday, is the next highest-ranked team in the division at No. 8 and will visit Oxford on Nov. 21. Ole Miss also gets No. 14 Texas A&M at home Oct. 24.

“Our schedule is still really tough,” running back Jordan Wilkins said. “We’ve got to keep rolling. We’re all excited, but this definitely showed what we’re capable of doing.”

Behind first-year quarterback Chad Kelly, Ole Miss has scored at least 43 points in each game. Kelly threw for 341 yards and three scores, all in the second half, with no picks Saturday and has completed 47 of his 73 attempts on the season for 898 yards and nine touchdowns with one interception. The defense forced five more turnovers against Alabama to raise its season total to 10.

Defending champ Ohio State remained at No. 1 despite a scare from Northern Illinois on Saturday and was followed by the second-ranked Spartans. Baylor rounded out the top 5. Georgia, fresh off its 52-20 pasting of South Carolina, is the highest-ranked team in the Eastern Division at No. 7.

STEMMING THE TIDE: Rebels hold on for another win…