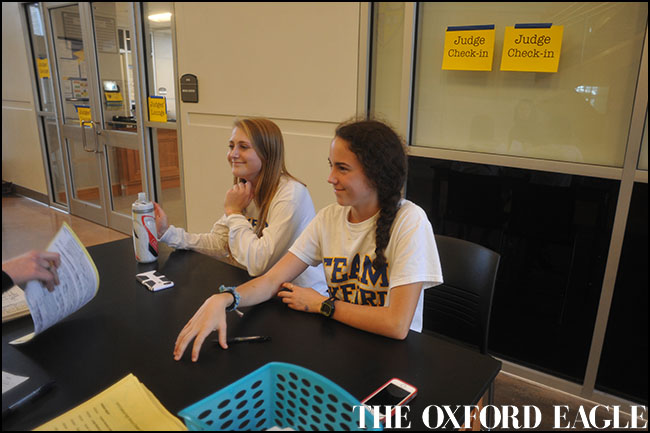 Debate was front and center over the weekend in Oxford.

Although the local team did not compete in its competition, its members still benefited from watching and learning from the various challenges.

Barbara Lowe said her speech and debate team students have worked hard over the years to advance themselves and their skills. They will have several competitions later in the year. She said she is proud of all of her students and what they have accomplished.

“I love coaching them,” she said. “One of the best parts of coaching speech and debate is that you get to know your students outside your classroom. Traveling for hours on a bus and competing for two days is a great way to get to know each other.”

Rebecca Grayzel-Ward, 16, a debate team captain and student of Lowe’s said she has been involved with the team for three years and enjoyed traveling and even competing at the national level.

She said the experience has helped in her overall high school career.

“We have to write essays a lot in English class … since we get a new topic every month we are constantly having to write and do more research and I think that’s really important in your high school career,” she said.

Another student, Victoria Cobert, 17, said the various categories have different qualifications in what you have to know and do to compete in them, but they all require a lot of research and competence.

She said some of the topics make students become more informed about social and political issues and reinforces the idea that people need to make decisions based on fact.

“It has taught me how to research on a deadline,” she said.

Colbert added she also has learned how to think about opposing viewpoints. Cobert said she has to think outside of the box and look at the argument from the other person’s view to make her final decision and argument.

Lowe said it is those skills that make debate more than just an extracurricular activity.

“My proudest moments are when my former students text me from college and say ‘Thank you, Dr. Lowe,’” she said. “‘I know I complained all the time in debate, but I just turned in a 10-page paper that I know is solid and all my friends are freaking out.’”