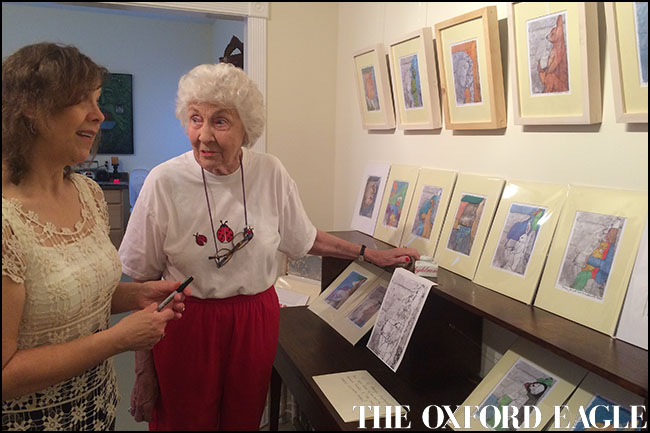 Artist Mari Foster, right, shows Water Valley resident Cecil Ford her unique collection of “sidewalk crack” prints on Saturday during the Water Valley Art Crawl. Foster posts pictures of sidewalk cracks on social media and asks her followers to tell her what they see. She then incorporates their vision into the prints.

Local talent got their chance in the spotlight this weekend at the annual Water Valley Art Crawl.

The crawl featured 16 stops that were stationed throughout the neighborhood and off of Main Street in local businesses, homes and galleries from 5:30 p.m. until 9 p.m. Saturday.

“We like to call it a big-little event,” Mickey Trefzer said.

Trefzer and his wife own the Bozarts Gallery on Main Street where they feature and support Water Valley’s art culture. He has been part of the art crawl since it started in 2008. He said the event tries to bring in as many local artists as possible. This year, more than 30 artists were exhibited.

The walk winds through the town with half of the stops directly on Main Street and the rest in walking distance. Visitors were free to stop and talk while they got a bite to eat and engaged with various artists.

Trefzer said one of the unique aspects of the event is the opportunity to visit the artist’s home and studio. Participants can view all types of artwork such as painting, sculpture, photography and more.

The first stop on the crawl, the Wesley House, showcased all ages and the stop had activities for younger visitors. Part of the tour included a table set up for children to color or draw their own piece of art.

Betsy Person, a volunteer at the Wesley house, said, “Here we make a point of encouraging some of the teenagers and little kids, really as young as seven, to show what they can do, particularly the ones who show creative tendencies and we are always amazed at what some of the kids come up with.”

Person described the atmosphere of the crawl as familiar. A lot of Water Valley’s residents support the town’s artistic efforts and are involved in Oxford’s art scene as well.

Some of the stops had local musicians performing and the event had live music from Tyler Keys and the Apostles for the duration of walking. The after-party at Hometown Pizza Cafe featured the Zediker Brothers.

“It’s a delightful thing,” said Margaret Daum said, a member of the Water Valley Arts Council. “Everybody enjoys it and the vitality it brings to Main Street.”