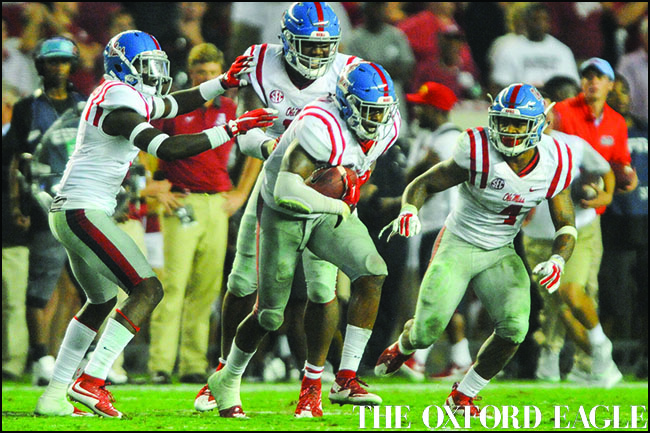 Rarities in sports are often marveled at extensively, and what Ole Miss did against Alabama on Saturday was about as rare as it gets in college football.

Ole Miss’ 43-37 win over the Crimson Tide was just the second time in 27 trips to Tuscaloosa that the Rebels have left there a winner and their first time doing so since 1988. It was just Ole Miss’ 11th win ever over Alabama, and the Rebels had never gotten two of those victories in back-to-back years until the final second ticked off the clock inside Bryant-Denny Stadium early Sunday morning.

The signature moment drew an impromptu dance session afterward in a jubilant locker room from head coach Hugh Freeze, moves for which he gave himself an F, as well as a celebratory visit from country music star Eric Church. The win also has the Rebels right there with LSU as the early leaders in the race for the Southeastern Conference’s Western Division crown, vaulting Ole Miss to No. 3 in this week’s AP poll.

“I tell you what, we were on cloud nine,” Ole Miss quarterback Chad Kelly said.

But Ole Miss (3-0, 1-0 SEC) has the rest of September, October and November to get through before finding out where they’ll be heading in December or January. If the Rebels want Saturday’s win to mean as much then as it does now, they’ll have to forget about it for the time being.

Next up for Ole Miss is a date with Vanderbilt on Saturday at Vaught-Hemingway Stadium.

It’s not like Ole Miss doesn’t have anything to work on.

While the Rebels put up the second-most points they ever have against Alabama, Ole Miss didn’t have to drive far to get most of them thanks to five Tide turnovers, four of which gave the Rebels possession at Alabama’s 31-yard line or closer. There was the 73-yard pass to Cody Core and the miraculous 66-yard catch and run by Quincy Adeboyejo, but Freeze said his offense left other potential big gainers on the field.

“We were not very good on third downs, and we missed several opportunities to have explosive plays,” Freeze said. “We’ve got to get those corrected.”

Ole Miss’ defense was back on the field quickly with all the offense’s short fields, but having to defend 100 plays wasn’t all about field position. Alabama sustained drives by converting 11 of its 20 third downs, helping the Tide make a game of it at the end.

“We had them backed up a couple times in second-and-long, and we’d have a missed assignment and let them get back up (close on third down),” linebacker C.J. Johnson said. “We were awful on third downs, and that’s something we take pride in with this defense and we’re going to get better at this week.”

Most don’t expect Vanderbilt (1-2, 0-1) to be a legitimate threat to Ole Miss’ unblemished record. The Commodores, who finished winless in the SEC a season ago, already have losses to Georgia and Western Kentucky.

But Ole Miss can’t afford to take anyone lightly now that it’s got legitimate playoff aspirations.

“We have to understand that if we want to be the best and we want to go 15-0 and win the national championship, we have to make sure that we’re hitting on all cylinders on every single play, every time we’re out on the practice field or whether we’re watching film,” Kelly said. “We have to keep in the moment and understand there’s a big picture that we’re trying to get to, and the only way we can achieve those goals is if we’re hitting on all cylinders every single time.”