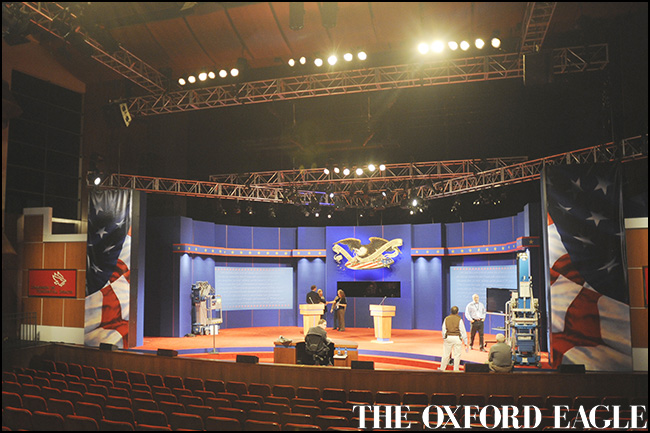 Workers mingle about on the presidential debate stage at the Ford Center at the University of Mississippi on Thursday, September 25, 2008. Republican john McCain and democrat Barack Obama are scheduled to debate Friday night. (AP Photo/Oxford Eagle, Bruce Newman)

On Saturday, many in the community saw the fruits of their labor come to fruition with the dedication ceremony for the restored Burns-Belfry building.

The building was brought back to life as a new museum and multicultural center for all people to enjoy.

It was also a day of memory for those who remembered the old building that was home to the congregation now known as the Burns United Methodist Church until 1974.

The church was built in 1910 on the site where Oxford freedmen first built their own house of worship after the Civil War.

Oxford to host own debate events

For those who don’t want to head to the Grove or sit at home to watch the Presidential Debate hosted in Oxford, there are plenty of options.

To celebrate Oxford’s community spirit, a patriotic celebration will be held Thursday on the east side of the Lafayette County Courthouse. Music and songs will be performed by the Lafayette and Oxford high school bands and choruses as well as the Rising Star Fife and Drum Band.

“Expect a very energy-filled celebration of the debate being in our hometown,” said Mary Ann Fruge, chairwoman of the subcommittee that planned the event.

Events are also being held on Friday.

First Baptist Church was defaced for a second time since speaking against a “culture of alcohol.”

So now leaders of the church are targeting the vandals with prayer.

The people who have scrawled pro-party messages on the church building during the first two home-game weekends of the football season will be among those who will be lifted up in prayers at a 12-hour prayer vigil scheduled for Saturday.

“Obviously, they’ve got some things going on spiritually, where we believe it must be a very sad way to live,” said the Rev. Eric Hankins, senior pastor, who led the public stand against the local “culture of alcohol” last fall.

A grassroots effort to bring changes to the community is underway, thanks to members of TRIAD.

Among the things coming to fruition are a cellular phone project for postal carriers, a booklet “Basic Services for the Elderly in Lafayette County,” more 911 signs and more.

A grant for $7,800 from the Council on the Aging was approved and will be put to use to fund selected projects also.

A national waste management company using the Oxford landfill has been exceeding the dumping limits imposed by city officials.

Browning-Ferris Industries has permission to dump waste collected in Oxford, but it has exceeded its monthly allowance of 5,000 cubic yards of debris since the agreement went into effect.

Aldermen this week granted permission to continue dumping but have imposed a hefty fine if the allowance continues to be exceeded.