Moore ‘ready’ to fill in for Conner 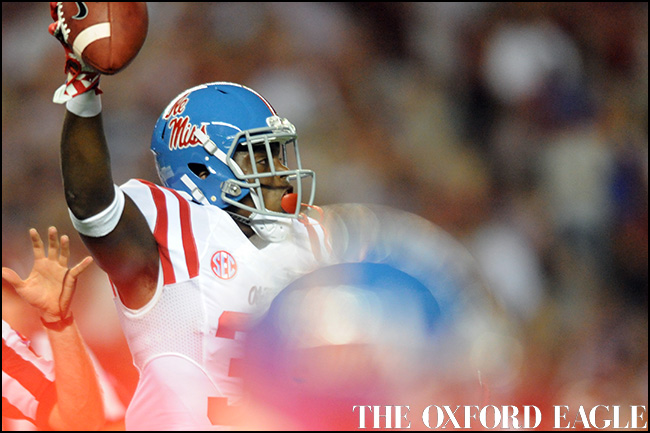 Ole Miss’ A.J. Moore (30) recovers a fumble on the opening kickoff against Alabama at Bryant-Denny Stadium in Tuscaloosa, Ala. on Saturday, September 19, 2015.

Hugh Freeze preaches to all of his players the importance of preparing like they’re starters because there’s always a chance they’ll be needed in that capacity.

That warning has come to fruition for A.J. Moore.

Moore will step in as the starter at the Rebels’ Huskie position with All-SEC safety Tony Conner sidelined for at least a month after undergoing surgery to repair the torn meniscus in his right knee. Moore, a sophomore, has spent most of the last two seasons as one of Ole Miss’ top performers on special teams but will likely make his first career start on defense against Vanderbilt on Saturday (6 p.m., ESPNU).

Moore is splitting reps with true freshman Zedrick Woods with Conner on the shelf, but Moore has been Conner’s primary backup since he arrived on campus last summer.

“Coach always said the backups were one snap away from being a starter,” Moore said following Tuesday’s practice. “He just always told us to be prepared, and here it is. I’m ready.”

The Huskie is a nickel corner that serves more as a hybrid between an outside linebacker and a third safety in the Rebels’ 4-2-5 scheme. Ole Miss asks a lot out of Conner there whether it be sinking into the box to help in run support or manning up a tight end or slot receiver in pass coverage.

Conner has proven to be the perfect package of versatility at that spot since he arrived on campus, and the 6-foot, 199-pound Moore, who’s a few pounds lighter than the 212-pound Conner, said his run support is ahead of his coverage at this point.

But Moore said he doesn’t feel like it’s such a liability that he can’t do everything asked of him at the position.

“I’m confident,” Moore said. “We work out there every day. We work on man coverage, and I can only get better. I’ll be ready.”

Moore has made the most of the opportunities he’s gotten so far, forcing a pair of fumbles and recovering a pair in the first three games with 11 tackles and a sack. Now coaches get to see what he can do on a full-time basis.

“I’m really looking forward to it,” Moore said. “We’ve got a great coaching staff, so they’re going to have me well-prepared. I’m just going to go out there and do my job.”

‘Totally new Ole Miss’
Things went south for Ole Miss after last year’s win over Alabama as the Rebels played .500 ball in the second half of the season to go from playoff contender to a four-loss team.

But players insist they’re not letting the past creep into their collective mind. All they can worry about is the here and now.

“I feel like this team is stuck in the moment because the moment is real beautiful,” defensive tackle Robert Nkemdiche said. “People don’t like to do that. They’re always worried about something else. They keep them in their thoughts and acts just like their mind does. I feel like this team is focused on the moment. No matter what last year was or two years ago, it’s just a different program.It’s hard to think about the old Ole Miss. This is a totally new Ole Miss. It’s fun that we see everybody preaching about the moment of now.”