STAYING AHEAD: Chargers sweep Cleveland, move to 5-0 in region 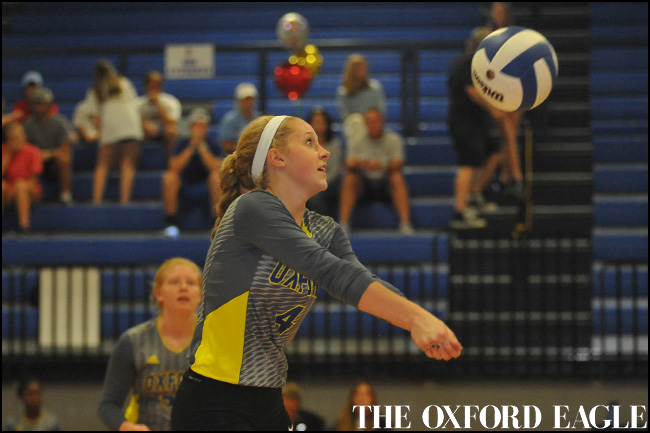 The Chargers barely broke a sweat, sweeping the Wildcats 3-0 (25-4, 25-7, 25-13) and improving to 5-0 in region play. Oxford coach Tara Ross knew the match might lack a competitive element and used the opportunity to work several players in, using 16 players throughout.

The win completed a season sweep of Cleveland for the Chargers, who beat them 3-0 at Cleveland High School earlier this month.

After cruising through the first two sets, Cleveland would not prove to be easy to put down a second time around. Scoring just 11 points in the first two sets combined, the Wildcats scored 13 in the third set and got to within five points of Oxford before fading late.

The surge in offense by Cleveland is part of something Ross attributes to a lack of focus by her team. The constant flux of opponents’ level of difficulty has caused the Chargers to not find a rhythm when it comes to being locked in for each match. Bouncing from teams such as Cleveland, Greenwood and Holmes County Central to Lewisburg, Tupelo and Lexington has made it feel like Oxford is playing two seasons in one at times.

“We have a really hard time of being focused,” Ross said. “We had a tri-match in Tennessee last week, and you could tell that we’re not used to playing the competition that were playing. So we struggled a little bit coming together.”

Junior Maggee Hobson celebrated her birthday with 10 kills and three aces. Jordan Freeze led the team with 10 aces to go with four kills and seven assists. Freshman McLain Hill tied Freeze with seven assists of her own.

Playoff push
Having beaten Cleveland twice and a win over the rest of the teams in the region, Oxford is all but certain to claim the No. 1 seed heading into the MHSAA playoffs next month.

With matches against division foes as well as Senatobia, Lafayette and Lake Cormorant remaining on the schedule, Ross feels it provides enough competition to get her team ready for the postseason and the challenges it will possess.

“We have to really start getting ready for the playoffs,” Ross said. “We have to be motivated and stay focused in practice. We’ve got to do better or we are not going to make it far in the playoffs.”