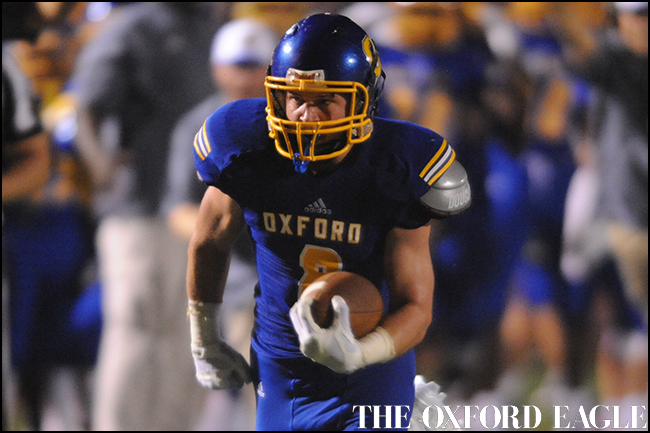 In the first four weeks of Oxford’s schedule, the Chargers played three Class 6A opponents and a much-improved Lafayette team.

They were not looking ahead six weeks into the schedule, but all of those games were played with one team in mind — West Point.

The eighth-ranked Chargers (2-2) host the Green Wave (3-1) in both teams’ Region 1-5A opener Friday night at Bobby Holcomb Field. It is the first of seven region games for Oxford, but it could become the most important where postseason positioning is concerned.

After having to travel to West Point twice last year, once in the regular season and once in the playoffs, Oxford coach Johnny Hill is very happy to be hosting the Green Wave for the first time in two years.

“I would dare say if you called all the coaches (in the region), it’s going to be down to West Point and us to win it,” Hill said. “Anybody can beat anybody, but the odds-on favorite in our region, it would have to be West Point and Oxford. Whoever wins this game has kind of got two games up on each other.

“I’m tickled to death to get to play at home. Usually it don’t bother me, but with West Point, it’s a little different. I think they are a better football team at their place than they are on the road.”

Last season, Oxford traveled down Highway 45 and defeated the Green Wave, 43-22, in their region openers then followed it up with a 42-14 win in the second round of the MHSAA Class 5A playoffs.

Oxford had a bye this past Friday, which separated its non-region schedule and region slate. Hill used the opportunity to travel to Macon and check out West Point in person in the Green Wave’s 20-6 win over 4A powerhouse Noxubee County.

What he saw made him feel that West Point may be better than last year’s team, even with the loss of a senior quarterback and running back.
“They’ve got several people. (Chris Calvert) is pretty good and (Demarrio Edwards) is pretty good,” Hill said. “Their defensive front, nobody’s been able to run on them up the middle. They’re pretty salty over there on the d-line. Their linebackers are typical West Point linebackers. They’re very active.”

Hill also noted the speed in sophomore quarterback Marcus Murphy. Murphy leads the Green Wave’s offense with 320 yards rushing and four touchdowns. He’s had two games of more than 100 yards gained on the ground. Through the air, Murphy has completed 8 of 21 passes for 144 yards with one touchdown and one interception.

“We have to figure out how to slow (Murphy) down a little bit,” Hill said. “They’ve got a good football team.”

In their games against Louisville and Noxubee County, West Point held each to less than 120 yards rushing. The Wildcats could only muster 58 yards while the Tigers gained 119 last week.
Oxford is averaging 117.5 yards on the ground led by sophomore Drew Bianco, and the Chargers will have to fight for every inch of their season average if they want to have success Friday night.

Rested and ready
With the bye coming near the midpoint of Oxford’s schedule, it allowed the Chargers to get as healed up as a team can be at this point of the season. It also gave them a head start on scouting and game planning the Green Wave.

“We’ve had a couple extra days to get ready for West Point, and I think that’s a plus,” Hill said. “I think (the bye) came at a really good time. We’d been through a meat-grinder for about four weeks, and now we have to kind of regroup and work out some kinks and get ready for start of the region play.”

STAYING AHEAD: Chargers sweep Cleveland, move to 5-0 in…