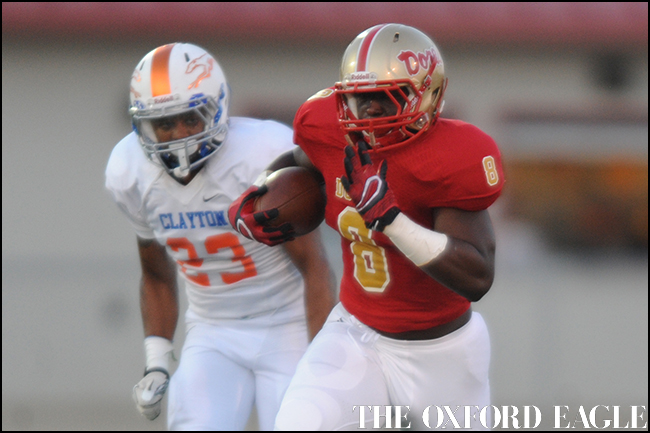 Lafayette has played three teams in a higher classification, one in the same and one from out of state.

But it’s an opponent a step down in classification that will present one of the biggest challenges in the first half of the Commodores’ slate.

Lafayette (4-1) will close out non-region play Friday with a trip to Charleston, a perennial power in Class 3A. The Tigers are the defending North Half champions at their level and have won four of their first five this season, their lone loss coming to 6A Olive Branch.

Lafayette has a win over a 6A school in Horn Lake as well as a 5A team in Grenada and is coming off a 27-10 win over a school its own size at Louisville. Oxford, which has won back-to-back 5A North Half titles, is the only team standing between Lafayette and a perfect record through five games.

“One of the best teams on our schedule so far,” Lafayette coach Eric Robertson said. “Oxford of course is one of the top teams in the state, but I think Charleston is for sure the second-best team we’ve played.

“The best two words (to describe them) are physical and fast.”

Charleston (4-1) does it by overwhelming most of its opponents with a combination of strength and speed. Robertson said the Tigers use multiple heavy sets with “10 different tight end sets and about 20 different formations we’ve got to prepare for,” but it’s not a given Charleston will hand the ball off with that personnel on the field.

The Tigers have run it 160 times compared to 68 attempts through the air, using the passing game for big plays once they’ve sucked in the defense. Charleston alternates between Tre Truly and Ahmad Alexander at quarterback, but the Tigers’ running threat is helping open things up downfield for both as Charleston is averaging 19 yards a completion.

“Last year with their North Half state championship team, they seemed to be more run-oriented,” Robertson said. “This year, I think they throw the ball better than they did last year, which makes them a little more dangerous.”

Versatile offense
And it’s not just the receivers the Commodores have to account for when Charleston puts it in the air.

“These tight ends can run, and they throw it to them,” Robertson said.

Charleston gives the Commodores one last tuneup before Region 2-4A play begins next week. Lafayette, behind 12 touchdowns from Tyrell Price, is averaging 31 points a game while the defense is allowing just 15 each time out, but turnovers have been an issue with the Commodores committing nine of their 11 on the season in the last three games.

Friday night will offer up another test to see if the Commodores can improve their ball security and clean up the rest of their game heading into the portion of the schedule that matters.