NOTEBOOK: Defense ‘bounced back’ from fatigue vs. ‘Bama 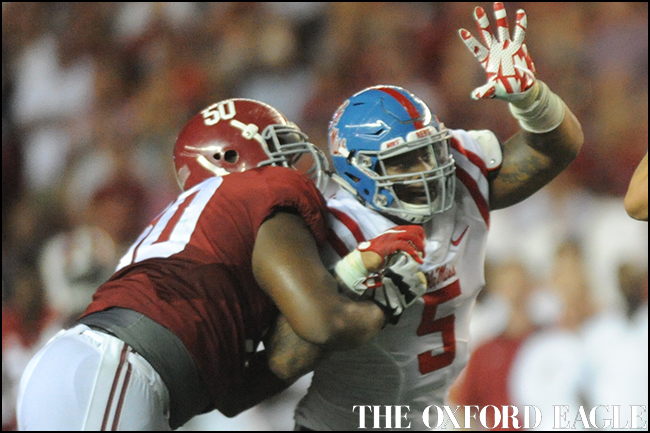 Ole Miss vs. Alabama at Bryant-Denny Stadium in Tuscaloosa, Ala. on Saturday, September 19, 2015.

After facing its first Southeastern Conference competition — and its toughest of the season — the Ole Miss defense showed signs of fatigue and the effects of being on the field for 100 plays.

After three days of practice, the Rebels appeared to have recovered.
“I think you play that many plays, which is our fault for not getting off the field on third down or part of it was, I think they bounced back good,” defensive coordinator Dave Wommack said after Wednesday’s practice.

With starters sitting most of the second half in each of Ole Miss’ first two games against Tennessee-Martin and Fresno State, the quality of reps were not ideal, but the experience of playing a full game was valuable.

“I think we should have played with more reps,” Wommack said. “You get in that big atmosphere, and there’s some younger guys that we really do believe in, but you get a little bit concerned about putting them in that situation with that crowd and everything. When I look back at it, I think we needed to play more people and we didn’t.”

‘A fight coming’
Vanderbilt may not look like much of a threat after looking at its performance on the field in the first three games.

After dropping their season opener against Western Kentucky, the Commodores played a close game for a half against Georgia before falling to the Bulldogs, 31-14. Last week, Vanderbilt handled Austin Peay, 47-7.

Vanderbilt ranks fifth in the SEC in scoring defense, allowing 17.3 points per game, and third in total defense.

“They’re one of the top in the nation in points per game,” head coach Hugh Freeze said of Vanderbilt’s defense. “Not giving up many yards. They played a really good Georgia team and battled them for two and a half quarters toe-to-toe. I think we’ve got a fight coming for sure. It will be a very difficult football game.”

Injury report
Freeze noted that offensive linemen Robert Conyers and Rod Taylor have practiced all week and will play on Saturday. He was still not sure on the status of Justin Bell, who has not returned to practice since injuring himself in the Alabama game.