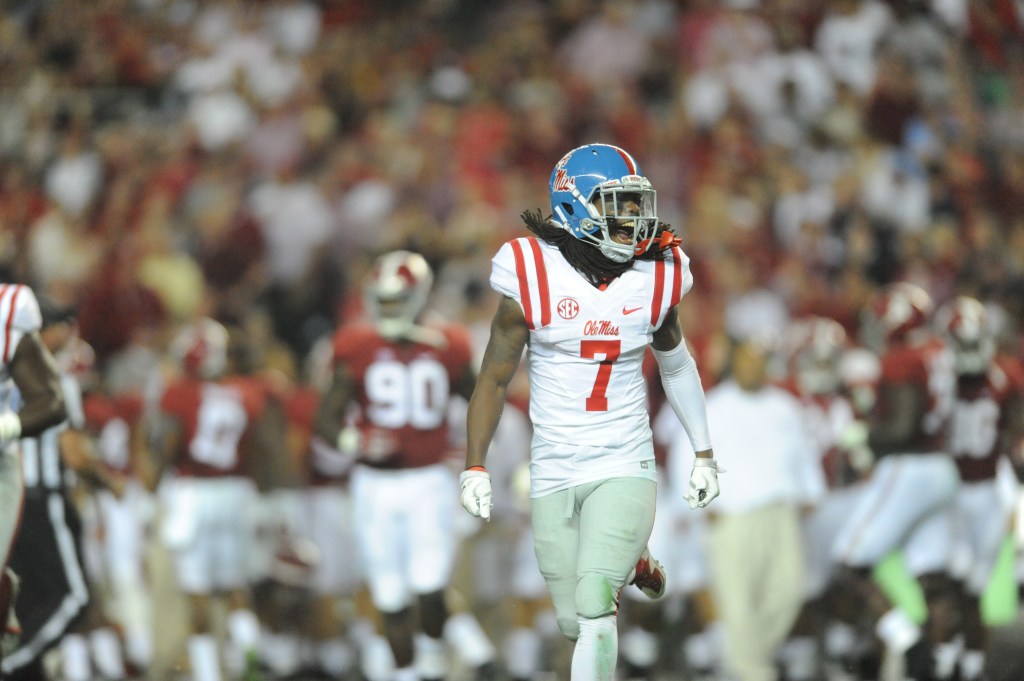 Ole Miss defensive back Trae Elston celebrates following his interception in the first half against Alabama at Bryant-Denny Stadium in Tuscaloosa, Ala. on Saturday, September 19, 2015.

Ole Miss’ offense is putting up points at a more rapid rate than anybody else in the country in the early part of the season.

The Rebels owe some of that to a defense that’s giving them plenty of extra chances.

Ole Miss is putting up 64 points per game with the offense getting at least two more possessions in each of its first three games thanks to a combination of defense and special teams that doesn’t look much different than it did a year ago at taking the ball away. The Rebels’ 10 forced turnovers are tied for tops in the nation, putting them at plus-6 in turnover margin.

“We’re going to fly to the ball,” Ole Miss safety Trae Elston said. “All 11 people get a hat to the ball, and that’s what creates turnovers.”

Elston has led the opportunistic charge, pulling down a Southeastern Conference-best three interceptions. The senior has accounted for two of Ole Miss’ three defensive touchdowns, which is tied for the national lead, and the Rebels’ seven interceptions and three fumble recoveries are also tied for tops in the country.

The Rebels created a season-high five turnovers against Alabama on Saturday, which helped Ole Miss get out of Bryant-Denny Stadium with just its second win ever in Tuscaloosa. Ole Miss scored 24 of its 43 points off takeaways with all 17 first-half points coming on scoring drives that didn’t start any farther out than the Crimson Tide’s 26-yard line thanks to the defense setting the offense up with short fields.

“We take pride when a break comes our way and we score,” Ole Miss coach Hugh Freeze said. “We did that.”

Stealing possessions isn’t anything new for the Rebels during Freeze’s tenure. Ole Miss has forced more than two turnovers a game since the start of the 2013 season and finished eighth nationally with 32 takeaways a season ago, including an SEC-best 22 interceptions.

All-Americans Senquez Golson, who pulled down 10 of those picks last fall, and Cody Prewitt took their talents to the NFL, but the Rebels haven’t skipped much of a beat, accumulating nearly one-third of last year’s turnover total in three games.

“It’s just the system,” said linebacker C.J. Johnson, who snatched one of Ole Miss’ three interceptions Saturday. “Our coaches, they put us in great positions to make plays. We have a great scheme, and coach (Dave) Wommack tells us all the time to just let the scheme work.”

Part of it is to cause confusion.

Rarely do the Rebels give opposing offenses the same look out of their 4-2-5 base set. Whether it’s sending four defenders or bringing six or seven from various spots on the field, Wommack, Ole Miss’ defensive coordinator, stays aggressive.

“Our guys did a good job disguising our looks,” Freeze said. “It’s a lot of different looks for the quarterback to process, and sometimes it causes him to throw it into coverage. We have had a knack the last few years trying to get a lot of turnovers, and that is probably why.”

But members of the back seven said it wouldn’t be fair to not give some of the credit to a defensive line that can quickly get in the backfield and make quarterbacks throw the ball quicker than they’d like. Tony Bridges’ interception of Jake Coker with 2:36 left Saturday came with an assist from end Marquis Haynes, who put a lick on the Tide’s quarterback as he released the ball.

“It makes the game way slower from them shooting the gaps,” Elston said. “Robert Nkemdiche, Fadol Brown, D.J. Jones, Marquis with his speed on the pass rush, it just creates chaos, which the linebackers and the safeties really like.”