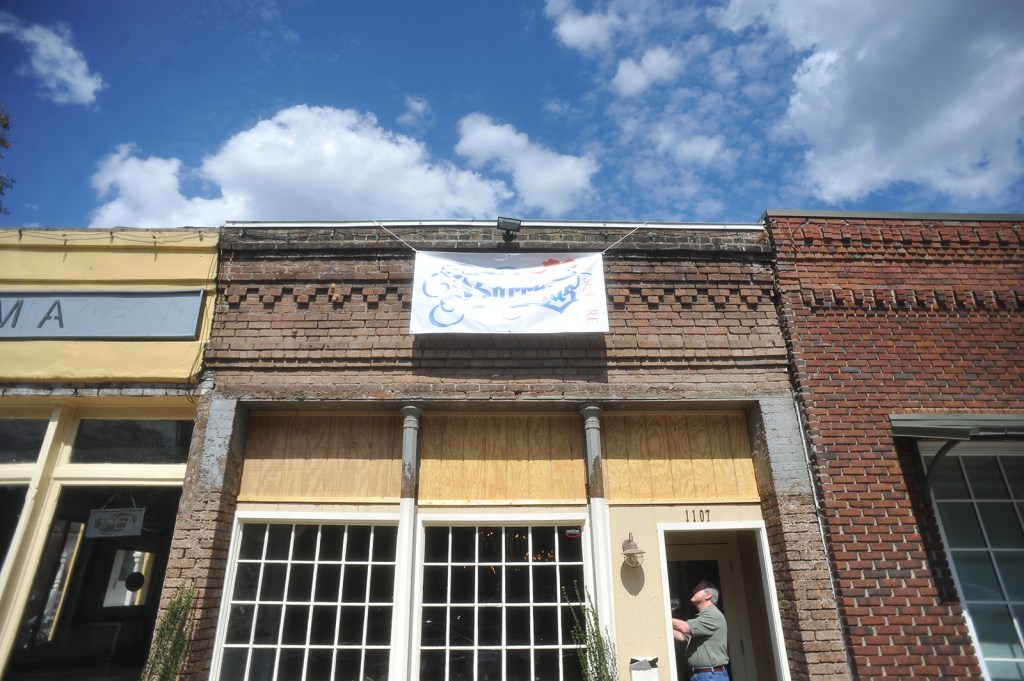 If buildings could talk, imagine the stories the ones around the downtown Oxford Square could tell.

They saw fire when most of the Square burned during the Civil War. They watched residents gather to sell their produce and wares from the back of their horse-drawn buggies. They overheard conversations with William Faulkner.

They could tell stories both good and bad, but all are a part of Oxford’s incredible history.

As businesses today rent or purchase buildings along the Square, little pieces of history are being uncovered. It might be a small piece of history — a type of brick, an old sign or perhaps original paint chips.

What lies underneath Oxford’s businesses around the Square is unknown for the most part.

However, in July, Trey Horne, owner of South Depot Taco, discovered a piece of Oxford history when he removed an awning from a building during renovations for a new restaurant he is opening, Greenline Salad Shop, located next door to South Depot.

While removing the awning, workers looked up to find the words “Callaway Music Co.” painted onto the wall.

“It wasn’t long before everyone started coming over and watching,” Horne said Wednesday. “The awning was metal and it was heavily attached to the wall. We assumed there was brick behind it. To our pleasant surprise, it was plaster and the logo. It was a total shock to everyone.”

Callaway Music was owned and operated by Richard F. “Dick” Callaway Jr. who opened the business in the late 1950s. Prior to that, it was a mechanic’s shop.

Horne, originally from Atlanta, came to Oxford when he was a student at the University of Mississippi in 2001. He fell in love with the town and remained. Oxford’s colorful history always interested him, which is obvious by looking at the countless old photos he has hung up in South Depot. Finding his very own piece of Oxford history was something to celebrate.

Horne didn’t attempt to convince the HPC to allow him to remove the logo from the front of his building. Instead, he sought the help of contractors knowledgeable in historical restoration to find out the best way to preserve the painted logo.

“It’s not perfect,” Horne said. “I wanted to see if there was a way to improve it. But everyone told me to leave it alone, that even trying to wash it could destroy it. As of right now, we are leaving it 100 percent alone and will monitor it over time.”

More recently, the owners of the newly opened Bacchus restaurant also were surprised to uncover some original brickwork when removing their awning.

Architect Julie Spears worked on both renovation projects, for Greenline and Bacchus.

After the Callaway logo was discovered, members of the Courthouse Square Preservation Commission were hesitant to grant Bacchus a Certificate of Appropriateness for planned changes to the facade, and the commission told Spears at a meeting last month to remove the awning first and see what was behind it.

“We expected to find brick,” Spears said Wednesday. “But we didn’t expect the great detailing that we found. It was a very nice surprise.”

The original steel columns and transom windows also were revealed. Spears said the owners of Bacchus plan on retaining all of the uncovered details.

Before the existence of Oxford’s two historic preservation commissions — one for residential and one for the Square — a lot of original details of the downtown were removed. Now, anytime a business wants to change the facade of its building, owners must come before the commission for approval of the plans. If approved, the business gains a COA. If not, owners can go back to the drawing board with help from city planners, to come up with ways to preserve history while renovating their building.

Spears said while she doesn’t know of anything specific, she knows more pieces of Oxford history could be revealed over time and tries to prepare her clients should that happen.

“There’s always things left to uncover,” she said. “It’s hard because you don’t know what’s there and it’s hard to prepare clients with the unknown budget-wise. Sometimes what you find is great and provides some neat opportunities. But once you start tearing things away, it becomes a bigger project.”

Sometimes it can mean not always being able to do what you want with the building. Horne has lost a large area on the front of his building where he could have put a sign or something to advertise Greenline.