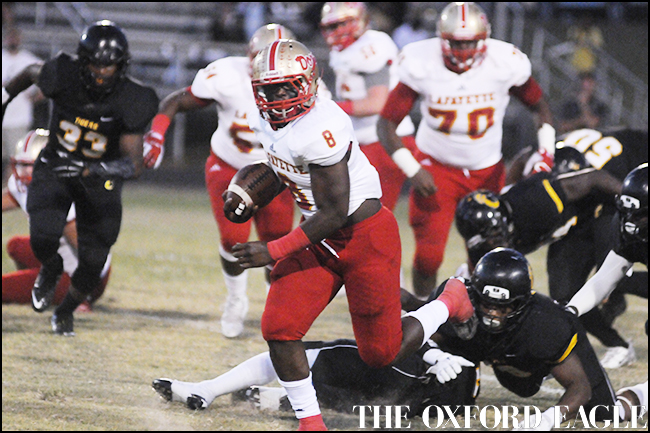 The formula is becoming redundant — and successful — for Lafayette.

Price came alive late to rip off a long touchdown run and Will Ard threw for another score to back another stout performance from the defense as the Commodores rolled past Charleston, 26-0, Friday in their final tuneup for region play.

Ard started the scoring with a 60-yard touchdown pass to Tyler Williams midway through the first quarter, and the Commodores (5-1) methodically tacked on throughout. After taking a while to get going against an athletic Tiger defense, Price finished with 161 yards — his fifth straight 100-yard game heading into this week’s Region 2-4A opener against Ripley.

Price racked up 122 of his yards after halftime on just four carries, including a 75-yard touchdown run that ended his night with 40 seconds left in the third quarter. His 14 carries were the second-fewest he’s had all season as coaches try to keep him fresh for the stretch run after he combined for 86 carries in the previous three games.

Jamarcus Quarles’ 18-yard scoring scamper with 3:10 remaining put an exclamation point on Lafayette’s first shutout. Quarles finished with 64 yards on 10 carries and has 119 yards in the last two games after not getting a carry the first four weeks.

“It’s going to be a long season, and we can’t run him (that much),” Robertson said of Price. “And we want to get Quarles as many reps as we can because we think he’s a good one, too.”

Charleston (4-2), the defending Class 3A North Half champion, averaged 33.8 points over its first five games, but the Tigers’ attempts to get their running game going with their fleet-footed pair of mobile quarterbacks weren’t successful against the Commodores’ speed.

Lafayette limited the Tigers to 2 yards a carry and bottled up quarterbacks Tre Truly and Ahmad Alexander for 5 yards on the ground. The duo combined to complete six passes for just 43 yards against a defense that’s surrendering less than 13 points per game.

“We’ve just got to keep contain,” senior defensive end Vincent Lewis said. “We knew they were going to be fast. We had to keep contain on them everywhere we go. We had to break down, get stops, and we just had to make tackles.

“I had to stay outside at all times. I wouldn’t go inside because the quarterback, he can boot out.”

Lafayette had chances to tack on more touchdowns with trips inside Charleston’s 15-yard line on its first possession of the second and third quarters, but the Commodores settled for 31- and 19-yard field goals from first-year kicker Robbie Langley.

It left Robertson mixed in his feelings afterward.