‘Enoing’ at Sardis Lake a tradition 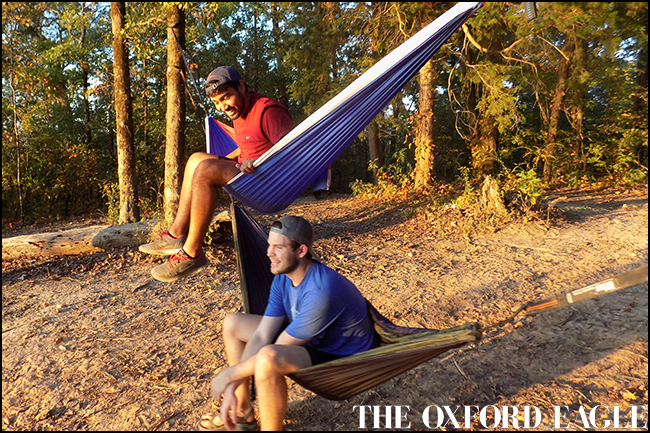 Ruffin Oberschmidt, 22, of Brookhaven, and Tony Del Cid, 22, of Wesson, started coming to Sardis Lake their first semester at the University of Mississippi to get away from the stress of finals and campus life by “Enoing.”

Young Oxford residents have been enjoying the outdoor life at Sardis Lake for generations, but in the past few years some university students have been trendsetting new ways to enjoy the natural atmosphere.

Ruffin Oberschmidt, 22, of Brookhaven, and Tony Del Cid, 22, of Wesson, started coming to Sardis Lake their first semester at the University of Mississippi to get away from the stress of finals and campus life by “Enoing.” Eno is a brand of hammock that is popular among students.

“Eno” is short for Eagle Nest Outfitters, a hammock company based out of Florida. The hammocks are not your typical backyard accessories; they are designed to be portable, durable and comfortable so they can be used anytime and anywhere.

Oberschmidt said since they have been Enoing at Sardis Lake in their spare time they have met a lot of other students who share their passion for nature and recreational camping.

Oberschmidt and Del Cid said during the first semester they came to Ole Miss, some of their friends invited them to come out to Sardis Lake and enjoy the afternoon before their class schedule became hectic. Although each came separately for their first time at the lake, the quiet and relaxing environment kept them coming back over the next two years.

Del Cid also said he really enjoys swimming, hiking and playing his guitar by bonfires where the students come to enjoy the atmosphere and talk.

“It’s just an Oxford thing. It’s something that hasn’t changed since students have been here,” Del Cid said.

Del Cid said he can see how the town has grown in the short time he has been a resident. He hears students talk about new buildings being built over time and the landscape of the town evolving. It is refreshing to have a natural escape that is untouched.

Oberschmidt and Del Cid enjoy Enoing during the most stressful weeks of school, but maintain that the lake has the perfect atmosphere all year round. Whether students come out in sweaters in the winter or in shorts and T-shirts during early fall, the Enoing culture is constant.

Oberschmidt added that he and Del Cid are just two of many students who like to Eno at the lake.

Enos come with adjustable detaching straps that are designed to hold a range of weight. The straps are made to grip whatever they are tied to so they are perfect for setting up between trees while camping or picnicking in nature.

Oberschmidt and Del Cid have a favorite spot that is a short hike from the water’s edge. They put up their hammocks between two cedar trees on the bluff overlooking the lake.

“This is definitely one of the better things to do during the day, so it’s great for the summer. If you want to do something outdoors, this is the place to go,” Oberschmidt said.

Oberschmidt is in the process of getting a degree in English and plans to stay in Oxford for law school. He said he still sees himself coming out to Eno and study for the LSATS.

Del Cid said he plans to own a food truck after graduation. Both Oberschmidt and Del Cid see themselves in Oxford and enjoying the campus culture by the lake.

“It brings out the best in people I like to think,” Del Cid said.