GETTING A SCARE: Ole Miss sputters, holds off Vanderbilt to stay unbeaten 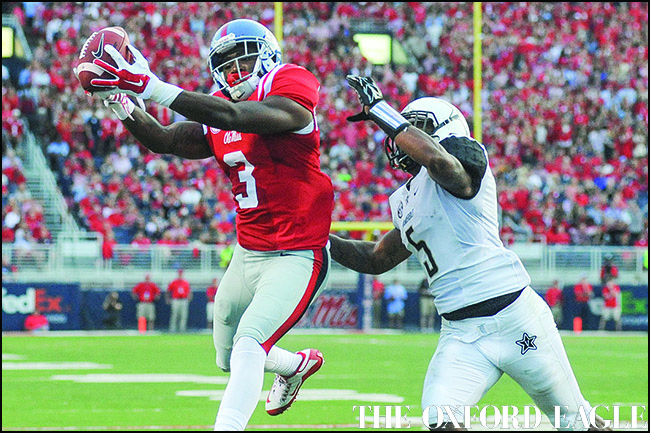 A week of euphoria nearly turned into disaster for Ole Miss.

The third-ranked Rebels got all they wanted from Vanderbilt Saturday night but held off the Commodores for a 27-16 win in front of 60,654 at Vaught-Hemingway Stadium. Ole Miss notched a rare road win over Alabama seven days earlier yet didn’t put away a team that’s already lost to Western Kentucky until late.

“We just didn’t play real well, and I have to start with myself,” Ole Miss coach Hugh Freeze said. “I can say we didn’t prepare (our players) well enough.”

Vanderbilt (1-3, 0-2 Southeastern Conference) made three trips to the red zone in the second half, the last coming when Jahmel McIntosh intercepted Chad Kelly and returned it to Ole Miss’ 19-yard line early in the fourth quarter. But Tommy Openshaw missed a 32-yard field goal attempt to keep Ole Miss’ lead at 20-16, essentially ending the Commodores’ upset bid.

“We’re getting everybody’s best no matter who it is, no matter the opponent,” Ole Miss linebacker Denzel Nkemdiche said. “Anybody that’s getting a chance to play us is going to play their absolute best.”

Kelly was picked twice as he and the rest of the offense struggled to piece together drives against the Southeastern Conference’s third-ranked defense, which limited the explosive plays Ole Miss had been accustomed to by confusing the Rebels’ first-year starter. When the Rebels (4-0, 2-0) did get close to the end zone, the points they usually got came on the foot of Gary Wunderlich, who connected on a pair of field goals.

But Robert Nkemdiche turned Cale Luke’s blocked punt late in the third quarter into the go-ahead touchdown with a 1-yard plunge, his third offensive touchdown of the season. Jaylen Walton, who had 133 yards on 21 carries, salted away the victory midway through the final quarter with a 3-yard scoring run.

“They just stayed in two high (safeties) the whole time and wanted us to run the ball,” Kelly said. “We could’ve taken our shots every once in a while. I know I missed a read on the two interceptions.

“They did a good job doing stuff that we weren’t really prepared for. That’s what teams do. They scheme against you, and they try to mix you up a little bit.”

Ole Miss, which began the night as the national leader in scoring offense, finished with 472 yards but went for 3 of 13 on third down. Kelly went 24 of 42 for 321 yards with a 20-yard touchdown pass to Damore’ea Stringfellow. Laquon Treadwell was the quarterback’s favorite target with eight catches for 135 yards — his first 100-yard game of the season.

Vanderbilt cut into Ole Miss’ 13-3 halftime lead with a seven-play, 50-yard drive on its opening possession of the second half culminating in Openshaw’s 41-yard field goal. The Commodores blocked Wunderlich’s field goal attempt and marched 80 yards on their next possession to draw even when Ralph Webb snuck out of the backfield on third down to catch Johnny McCrary’s pass for a 7-yard touchdown midway through the third quarter.

Playing for the first time without injured nickel corner Tony Conner, Ole Miss’ defense struggled to stop the Commodores on third down at times. Vanderbilt was 5 of 6 on its second possession to go up 3-0, but Ole Miss got the Commodores off the field on 10 of their final 15 third-down attempts.