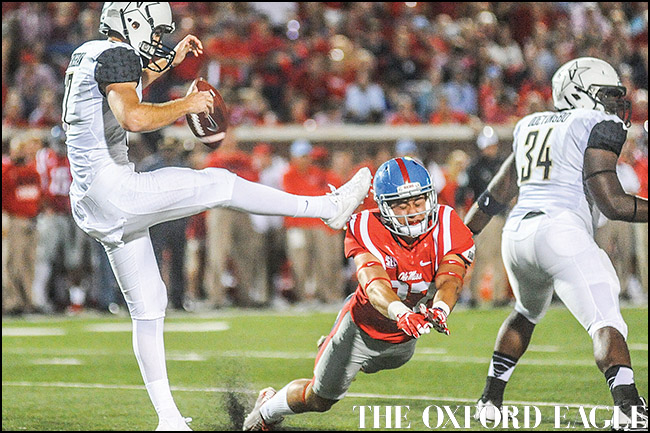 It was a grind for No. 3 Ole Miss all night in its 27-16 win over Vanderbilt Saturday.

With the offense in disarray for the majority of the game, the Rebels were in need of a spark. Sophomore Cale Luke provided that spark in just his third career game.

With the game tied 13-13 late in the third quarter, Luke broke through Vanderbilt’s punt protection and blocked Tommy Openshaw’s punt.

It was not how Luke envisioned his day going at the onset.

“I just came out there and gave it 100 percent,” Luke said. “It just happened to work out that way. It’s amazing.”

Ole Miss had been able to get penetration on every Vanderbilt punt. Luke just happened to be the one who managed to put his hands on one first.

“We’d been going after it all night,” Luke said. “We knew one of us was going to be able to come clean and have a chance to block it every single time. Finally it ended up being me.”

The Rebels scored on their next drive to break the tie and make it 20-13 at the time, a lead they never lost again.

“I told (Luke), ‘You don’t know how big that was,” linebacker C.J. Johnson said. “That changed the game.”

OL shuffle
With Laremy Tunsil still sitting out due to the pending NCAA investigation and some injuries sustained last week at Alabama, the Rebels’ offensive line has a bit of a makeover yet again.

Aaron Morris started at left guard while freshman Javon Patterson moved over to right guard. Morris then left and was replaced by Patterson with redshirt freshman Jordan Sims taking over at right guard.

Whether it was the rearranging of the offensive front or the Vanderbilt defense, quarterback Chad Kelly was sacked three times and faced constant pressure throughout.

Third-down struggles
Nothing was working for Ole Miss on offense.

One of the biggest issues was its inability to sustain drives, or lengthy drives. The Rebels were 3-for-13 on third down against a Vanderbilt defense that seemed to confuse Ole Miss when it came time to try and move the sticks.

“I just don’t think we exectuted,” offensive coordinator Dan Werner said. “We had a couple plays that were exactly what we thought we’d get, we got. Either we dropped a pass or a bad throw or a bad decision or whatever it was. A couple times, there was pressure. Those things happen. (Vanderbilt) is a good defensive football team.”

Extra Points
Ole Miss piled up 472 total yards of offense and has eclipsed 400 yards in every game this year … Kelly threw for 321 yards, and it was his third straight 300 yard game. … Defensive tackle Robert Nkemdiche’s 1-yard touchdown was his third in four games.