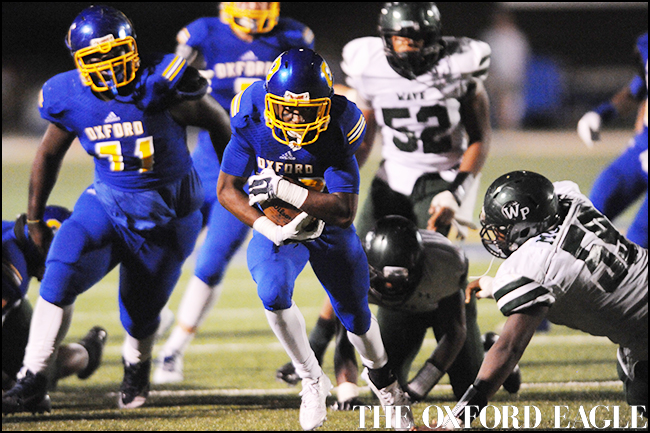 Oxford High's Devin Rockette (22) picks up a fumble and returns it for a touchdown against West Point at Bobby Holcomb Field in Oxford, Miss. on Friday, September 25, 2015.

The week off did Oxford a lot of good.

A fast start by a potent offense and an opportunistic defense led the Chargers past West Point in both teams’ Region1-5A opener. Oxford dominated the Green Wave, 50-28, at Bobby Holcomb Field Friday night.

Oxford (3-2, 1-0 Region 1-5A) received the ball to open the game, and the Chargers did not waste their time on the field. All it took was three plays for the Chargers to find the end zone. Senior quarterback Jack Abraham hit senior wide receiver D.K. Metcalf for a 66-yard touchdown for a 7-0 lead less than a minute and a half into the contest.

It was all Oxford from there.

The Chargers scored on their first three possessions of the game. Sophomore running back Drew Bianco capped Oxford’s second drive with a 2-yard run, and Abraham hit a wide-open Ken Presley for a 78-yard touchdown on the next drive. Jimmy Greaser caught a pass to convert the two-point attempt, and Oxford led West Point (3-2, 0-1) 22-0 late in the first quarter.

“We came out and kind of smoked them,” Oxford coach Johnny Hill said. “We got at least three extra days if not four to get prepared for your rival, so to speak, in region play. I think it was huge for us.”

West Point did not go down with a whimper, but untimely penalties and miscues stalled any comeback attempts the Green Wave made.

Running back Chris Calvert looked to have had an answer and get West Point back in the game when he scampered 28 yards down the sideline for a touchdown. It would have cut Oxford’s lead to 14-7 at the time, but a holding call negated the score and West Point eventually punted.

Calvert was not finished as he would score on a 6-yard run on West Point’s next possession. The Green Wave then took advantage of a poorly fielded kickoff by Oxford, and Calvert capped that drive with a 24-yard run. West Point scored twice in 54 seconds and closed Oxford’s lead to 22-14 early in the second quarter.

Defensive score
Momentum appeared to be putting on a Green Wave jersey as Oxford was forced to punt the following possession. West Point quickly killed its own momentum when a fumble was recovered by Charger defensive back Devin Rockette, who had a 21-yard scoop and score to make it a 29-14 Oxford lead.

The defense came up big later in the game when C.J. Terrell picked up where he left off against Lafayette and snagged his third interception of the season. Abraham found Metcalf for a 38-yard touchdown pass on the next play to make it a 43-14 Oxford lead right before halftime.

“What (West Point) does it tough,” Hill said. “I’m glad we got to see it because we are probably going to get to play them again down the road, and we’ll be ready for that type offense.”
It was one of Metcalf’s better games this season as the Ole Miss commit had four catches for 116 yards and two touchdowns in the first half. He ended the night with five catches and 121 yards.

“They came out and didn’t double team (Metcalf), which was crazy,” Abraham said. “I don’t know why they didn’t do that. Even when they were double teaming him, we were still getting him the ball, letting him make plays. I know that gave him a little boost.”

Injury scares
Bianco had just four carries for 8 yards to go with his one touchdown. The action was limited for the running back as a pinched nerve caused him to miss the second half. Hill noted Bianco was held out of the last two quarters as a precaution.

Late in the game, Abraham was tackled by West Point’s Everett Cunningham and appeared to have injured himself after the hard hit. The play resulted in the defensive lineman being flagged for targeting and ejected for the final minute.

After about two minutes on the field, Abraham got up under his own power and walked to the sideline.