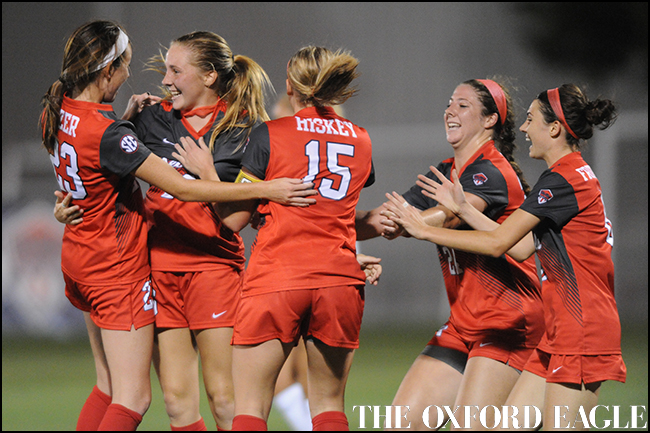 In a Friday night Southeastern Conference thriller at the Ole Miss Soccer Stadium, the Ole Miss soccer team rallied from a two-goal halftime deficit for the first time in program history, defeating Alabama, 3-2. With the comeback victory, the Rebels (7-2-2, 1-2-0 SEC) earned their first SEC win of the season.

It took a historic comeback, but Ole Miss continued to have Alabama’s number, defeating the Crimson Tide (4-5-2, 1-2-0 SEC) for the fifth straight time. Ole Miss has now won 10 of the last 11 matchups between the SEC programs.

The Rebels let their toughness shine through tonight by tallying three goals in a mere 17 minutes during the second half of the match. Despite being outshot by Alabama 15-13, the Rebels found the back of the net when it mattered most.

Addie Forbus started the rally by scoring just 17 seconds into the second half for her seventh goal of the season. Sophomore Liza Harbin scored the first goal of her career in the 57th minute to give the Rebels the equalizer. Shortly after, freshman standout CeCe Kizer scored her 10th goal, and sixth game-winner, of the season. Goalkeeper Marnie Merritt held strong for the Rebels marking four saves on the night.

As the two teams took to the pitch in the first half, the scoreboard found favor with the Crimson Tide. Alabama tallied two goals in the first half to claim the advantage. The first goal of the evening was scored in the 24th minute on a cross from Alabama midfielder Cilia Jimenez Delgado to forward Christina Martensson who sent the ball in on a header.