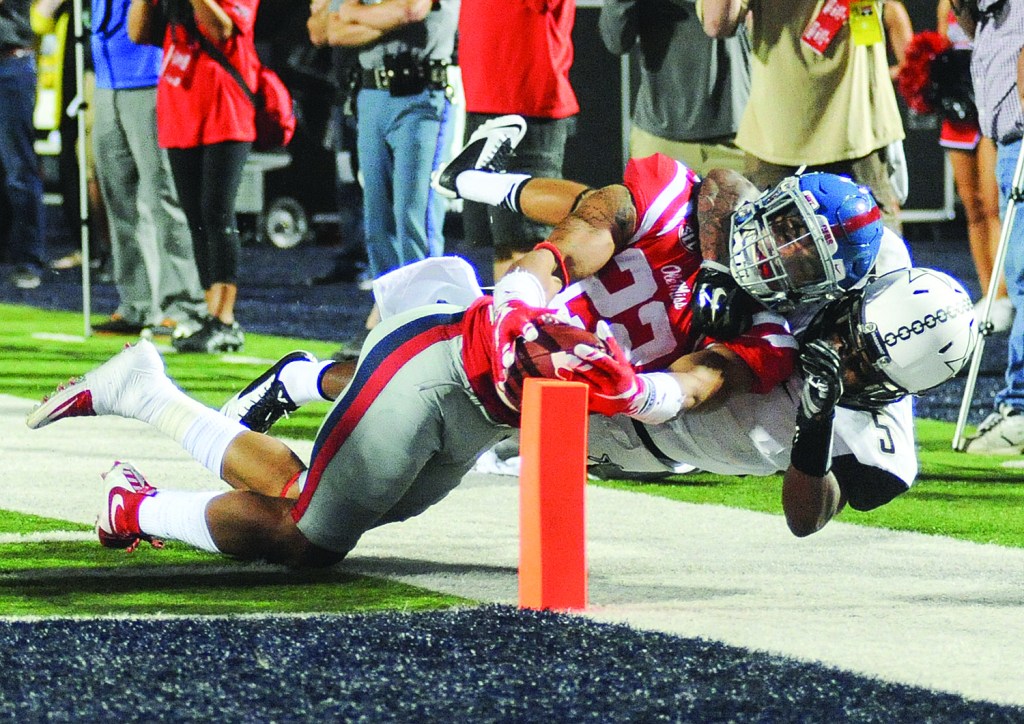 Self-inflicted wounds, a better Vanderbilt defense and questionable calls inside the Commodores’ 5 yard-line kept what has been a high-octane offense sputtering.

Red-zone offense was the biggest culprit.

Chad Kelly had a pedestrian night by his early season standards, completing 24 of 42 passes for 321 yards and one touchdown. He also had two interceptions, doubling his season total entering Saturday night.

“We have to prepare better,” Kelly said. “(Vanderbilt) did a good job with stuff that we weren’t really prepared for. That’s what teams do. They scheme against you and they try to mix you up a little bit.”

Ole Miss showed signs of life, moving the ball at times against the Commodores’ defense. Once the Rebels entered Vanderbilt’s 20-yard line, it was a different story.

The Rebels were ranked No. 1 in the Southeastern Conference in red-zone offense entering the game. They had a perfect conversion rate of 15-for-15 with 12 touchdowns and three field goals. Ole Miss went 5 of 6 against Vanderbilt, but only three of those were touchdowns.

“All week everybody was talking about us letting down, but I was more worried that (Vanderbilt) was a good defense,” offensive coordinator Dan Werner said. “You look at what they’ve done statistically on defense this year, they’re pretty salty. Nobody has run the ball on them, and we got (in the red zone) and I was worried that they were going to be a little more physical than we had thought, and they were.”

It was not all on the Rebels as Vanderbilt came into this week ranked second in the SEC in red-zone defense, holding teams to a 62.5-percent success rate with four touchdowns and one field goal on eight trips.

Twice Ole Miss got inside Vanderbilt’s 10 and only once could it capitalize with a touchdown.

Late in the third quarter, the Rebels managed to find new life with multiple Commodore penalties ranging from pass interference to unsportsmanlike conduct. The ball kept getting placed at the 1 or closer, but it took Ole Miss seven plays to find the end zone with a 1-yard Robert Nkemdiche rushing touchdown, a score that broke a 13-13 tie at the time.

Earlier in the game Ole Miss put in its jumbo package at Vanderbilt’s 8 with Ryan Buchanan at quarterback and Jeremy Liggins at fullback. A few creative plays were unsuccessful and resulted in a Gary Wunderlich field goal.

“We scored some points, but we’ve got to be more efficient,” head coach Hugh Freeze said. “When we went with big personnel, (Vanderbilt) was beating us at the point of attack. Then we’d throw some balls off our run action, and Chad struggled with the position of the throw it seemed like.”