GETTING DEFENSIVE: Rebels extend winning streak to three with shutout of LSU 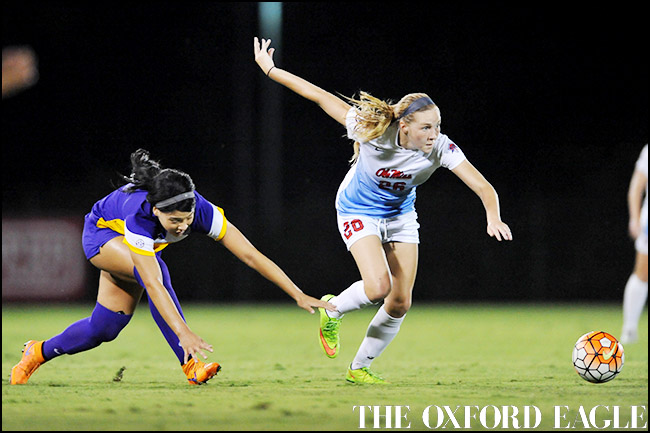 The Ole Miss soccer team capped off a perfect weekend of consecutive conference wins after defeating LSU in a 2-0 shutout Sunday evening. With the victory, the Rebels (8-2-2, 2-2-0 SEC) increased their winning streak to three games and became the first team to keep the Tigers (7-3-2, 1-3-0) off the scoreboard this season.

It was an all-around dominating performance for the Rebels, and it started with the offensive attack. Ole Miss out-shot LSU 21-7 and held a 13-2 advantage in corner kicks. Gretchen Harknett scored in the 17th minute and Addie Forbus added an insurance goal, her eighth of the season, to keep the Tigers out of striking distance.

The backline also had a great performance as LSU was not able to score a goal. Sunday’s shutout marked the fourth of the season for the Ole Miss defense, and the third individual clean sheet for redshirtfreshman goalkeeper Marnie Merritt. Merritt made a total of five saves, with three of them occurring in the second half. The shutout also marked the first time LSU has been left scoreless on the season.

“I think that was one of the better matches we have played all year,” said head coach Matthew Mott. “I thought we looked good from kickoff until the last minute. We were able to control the pace of the play. I am surely happy with this win. That is a great LSU team. I think Coach Brian Lee is one of the best, if not the best, coaches in our league.”

During the first half, Ole Miss earned five corner kicks during the first 10 minutes, and the Rebels outshot LSU 9-1, alluding to the impressive offense throughout the night.

“CeCe Kizer and Addie Forbus are really dangerous in the front together. I thought Jessica Hiskey, Liza Harbin, Maddie Friedmann, Danielle Gray and Melissa Capoccacia did a great job for us in the back, as well,” noted Coach Mott. “Marnie Merritt was also very good and steady for us in the goal. It is a total team defending effort. To keep them off of the board was really an accomplishment.”

GETTING A SCARE: Ole Miss sputters, holds off Vanderbilt…